U.S. Warns on Egypt Travel after American among Three Killed 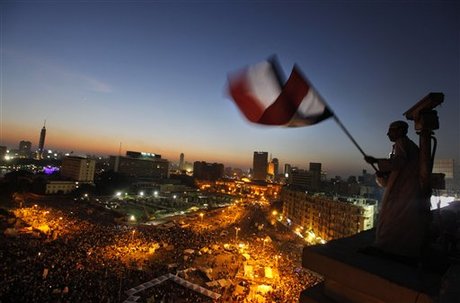 Washington warned against travel to Egypt after an American was among three people killed during rival demonstrations for and against Islamist President Mohamed Morsi ahead of Sunday's anniversary of his turbulent maiden year in office.

The U.S. State Department also authorized the departure of non-essential embassy staff for fear of further deadly violence in the face of the bitter antagonism between Morsi's Islamist supporters and the mainly secular opposition.

Morsi's opponents have called nationwide protests for Sunday to demand that he step down, sparking counter-demonstrations by the Muslim Brotherhood and its Islamist allies that have triggered often bloody clashes.

The U.S. citizen was killed as he took photographs of a demonstration in the Mediterranean coastal city of Alexandria, Egyptian officials said.

"We can confirm that a U.S. citizen was killed in Alexandria, Egypt," State Department spokesman Patrick Ventrell said in a statement.

A statement posted on the website of Kenyon College in Ohio, said U.S. embassy officials had identified him as one of their students, Andrew Pochter, 21, from Maryland.

He had been working as an intern at AMIDEAST, an American non-profit organization, the statement added.

Another man was killed earlier during the clashes in Alexandria.

In the canal city of Port Said, an Egyptian journalist was killed and several other people injured after someone threw a small explosive device at anti-Morsi protesters, a security official and witnesses said.

Clashes also erupted in the Nile Delta provinces of Daqahliya and Beheira. Across the country more than 130 people were wounded, security officials said.

The offices of the Freedom and Justice Party (FJP), the political arm of the Muslim Brotherhood, were torched in Alexandria and at Aga in Daqahliya, and its offices were stormed in Beheira.

The skirmishes are seen as a prelude to the mass anti-Morsi protests planned for Sunday, the anniversary of his taking office as Egypt's first freely elected president.

Morsi, 62, has been accused by opponents of failing the 2011 revolution that brought him to power and of ignoring nearly half of the electorate of around 50 million who did not vote for him last year.

Sunday's protest has been called by Tamarod (Arabic for Rebellion), a grassroots movement which says it has more than 15 million signatures for a petition demanding Morsi's resignation and a snap election.