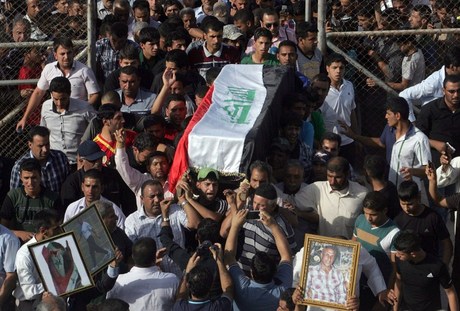 A string of attacks across Iraq killed 15 people Sunday, including nine in a bombing at a football pitch, the latest in a spate of blasts targeting Iraqis playing and watching the sport.

The deaths are part of a surge in violence that comes as Iraq grapples with months of protests by the Sunni Arab community and protracted political deadlock.

Analysts warn there may be no respite before general elections next year.

Attacks on Sunday struck in Mosul, Dawr, Sharqat and Hilla, but the deadliest violence hit the capital.

At 7:00 pm (1600 GMT) in the Nahrawan neighborhood of southeast Baghdad, a bomb went off as a group of youths were playing football at a popular pitch.

The blast killed nine and wounded 25 others, an interior ministry official and a medical source said.

Most of the victims were boys under the age of 16, the sources said.

The bombing was the latest in a string of attacks targeting football pitches and cafes broadcasting matches in this football-mad country where Iraqis closely follow not only the national team, but also an array of other international and club competitions.

Including Sunday's attack, more than 50 people have been killed in at least 10 such bombings in cities in and around Baghdad, but also in northern Iraq, according to an Agence France Presse tally.

Elsewhere, attacks outside the capital killed four people, while officials also found the bodies of two men who had been shot dead.

Among the victims was a 17-year-old girl killed by a roadside bomb near Dawr, north of Baghdad.

The latest attacks pushed the nationwide death toll for June to 448, the third successive month the figure has topped 400, according to an AFP tally based on reports from security and medical officials.

More than 1,000 people died in unrest across Iraq in April and May.

Iraq has seen a rise in violence since the beginning of the year, coinciding with rallies among the Sunni Arab minority against what demonstrators see as discrimination and the authorities targeting them.

Analysts say a government failure to address protesters' grievances has given militant groups recruitment fodder and room to maneuver.