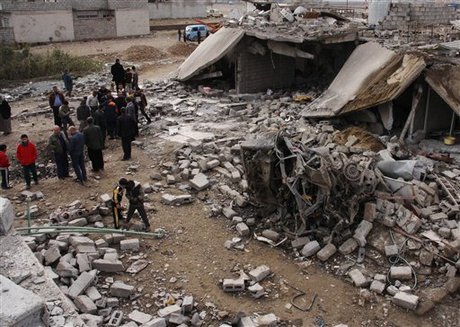 A wave of attacks in Iraq, mostly targeting Shiite Muslims, including a spate of market bombings, killed 46 people on Tuesday, raising fears of a revival of the country's brutal sectarian conflict.

Nationwide unrest is at its worst level since 2008, with the U.N. saying more than 2,500 people died from April through June, as Iraq grapples with a protracted political deadlock and months of protests among its Sunni Arab minority.

No group immediately claimed responsibility for the attacks, but most of the violence struck Shiite targets.

Sunni militants linked to al-Qaida frequently target Shiites, whom they regard as apostates.

Vehicles rigged with explosives went off minutes apart at around 6:00 pm (1500 GMT) in packed shopping districts of the Shuala, Kamaliyah, Shaab, Hurriyah and Abu Tcheer neighborhoods.

"I was watching TV and then I heard a very loud explosion," said Ahmed Ibrahim, a day laborer whose apartment balcony was completely destroyed by the nearby car bomb in Kamaliyah, where pools of blood had formed on the ground.

"Most people fled the scene, they were afraid of a second car bomb," he said, referring to a common militant tactic to target those who try to help the wounded in an effort to maximize casualties.

"God will take revenge on those who attacked us," the 31-year-old said. "Those who did this are terrorists, they are not Muslims, they are unbelievers."

Car bombs also went off in the predominantly Shiite southern cities of Basra, Amara and Samawa, killing a total of three people and wounding nearly 50 more.

Shootings elsewhere in Baghdad killed four more people, while bombings in the cities of Kirkuk, Baquba and Mosul, north of the capital, killed five people and wounded 17.

The violence came a day after a series of attacks north of Baghdad left 45 people dead, among them 23 people killed in a suicide bombing at a funeral in a Shiite religious hall.

The United Nations has said that more than 2,500 people were killed in a surge of violence from April through June.

Figures compiled by Agence France Presse showed the death toll from April through June was more than twice that of the first three months of the year.

Attacks in recent months have targeted a wide cross-section of Iraqi society -- government buildings and security forces were hit by car bombs, mosques were struck by suicide attackers, anti-Qaida militiamen were shot dead, and Iraqis watching and playing football were killed by blasts.

The surge in violence comes amid a protracted political standoff within Iraq's national unity government, with little in the way of landmark legislation passed since a 2010 parliamentary election.

And while political leaders have pledged to resolve the dispute, with Prime Minister Nouri al-Maliki meeting his two main rivals last month, no tangible measures have been agreed.

Meanwhile, tensions have persisted in a swathe of territory in northern Iraq that Kurdish leaders want to incorporate into their autonomous three-province region over Baghdad's objections.

And months of protests among the Sunni Arab community have continued unabated.

Analysts and diplomats worry that the multi-faceted standoffs are unlikely to see any long-term resolution at least until a general election due next year.