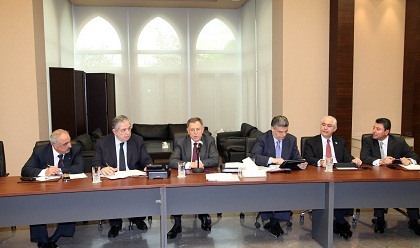 Al-Mustaqbal parliamentary bloc stated on Tuesday that Hizbullah is the “only party to be held responsible for what Lebanon is going through” because of its involvement in the Syrian conflict.

"Hizbullah, its weapons and its militia's involvement in the Syrian war are responsible for what Lebanon is going through,” the lawmakers said in a released statement after their weekly meeting at the Center House.

They questioned Hizbullah's role in last month's clashes of the southern city of Sidon, accusing the party of encouraging strife in the country.

"Has Hizbullah's role transformed into moving its Shabiha between (the Syrian border town of) al-Qusayr, Beirut and Sidon?,” the MPs asked.

“We demand answers regarding the party's involvement in Sidon through a transparent probe.”

Restating its support for the army in its mission of preserving security, the bloc, however, criticized the military institution's statements of “threats and preaching.”

“What were the measures and punishments adopted against those who assaulted (Salafist cleric Ahmed al-Asir's supporter) Nader al-Bayoumy? What is the truth behind the behavior of the head of the army intelligence's office and the military police officials in the South before and after the clashes?”

On Thursday, the army handed over to the military police soldiers suspected of humiliating and beating a man suspected of ties to Asir.

The statement stressed: "The bloc and the Lebanese people demand honest and quick answers to these questions as well as holding parties accountable.”

"We reject the army's unacceptable statements of threats and preaching.”

Al-Mustaqbal also criticized the military institution for “preventing journalists from doing their job” in Sidon.

The lawmakers assured that they abide by the articles of the memo submitted by Sidon MPs Bahia Hariri and Fouad Saniora to President Michel Suleiman.

"We are still waiting for a security plan to transform Sidon into a city free of arms and party slogans,” they noted.

The memo demands the referral of the case of the Sidon clashes to the Judicial Council and the prevention of all armed activities in the city.

It also urged the removal of all political flags from the city and the closure of all offices belonging to “armed groups.”

The bloc reiterated its support for a “fair, civil and democratic state that is based on religious coexistence.”

“We consider that Lebanon's legitimacy can only be manifested if it is based on military and security bodies protecting citizens and strengthening stability,” it added.

“The army in this respect is on the frontlines.”

The statement pointed out: “Political efforts must focus on confronting the possession of arms in the country.”

The MPs also discussed the security situation in the northern city of Tripoli.

“We condemn the armed presence in the city and we call for prosecuting the outlaws,” they said.

""Al-Mustaqbal parliamentary bloc stated on Tuesday that Hizbullah is the “only party to be held responsible for what Lebanon is going through” because of its involvement in the Syrian conflict.""

Baloney ... Oqab Saqr under Saad Hariri direction have been arming the Qaeda/Rebels since the beginning ... The former French FM said the Opposition in Syria was being armed well before the protests even began in Syria by ... England, France and the usual GCC suspects ...

Today, nobody is legitimate. Both government and parliament are expired. We need elections NOW!

Al-Mustaqbal is not only illegitimate they are guilty of sedition. It is crystal clear that they are behind the sectarian violence in Lebanon at the direction of the KSA, Qatar and the US.

LOL, these mustaqbal terrorists are entertaining.

LMFAO!!!! They forgot to blame Hizbolallah for Global warming, tsunami that hit Sri Lanka, and Katrina in New Orleans. Also the republicans are blaming Hizbolallah for Obama's re-election. I think there needs to be a song titled Blame it on Hizbolallah!!!! M14 needs to stop playing victim and get a new line PLEEEAASEEEE!

We clearly see the effects on al-Mustaqbal al-Ta3ees of the Sannis Lunaticus Berserki genetic mutation that affects all Sannis. God, the Sannis are in dire need for a MIRACLE cure! PLEASE GOD! Beyondo is getting short on virgins. Perhaps another miracle to replenish them might help. Amen.

who would like to face you? you are a syro/Iranian sectarian thug :)
you are not worth to exist, thus a nuisance to all Lebanese.

None of those guys at the table are angels, but it does not mean that Hezbollah should remain armed and dictate both foreign and domestic policy of the rest of the Lebanese. Hezbollah is today and obstacle to democracy, peace and prosperity. The rest of the world is moving forward and our country is at the mercy of an armed milicia. That's the main issue here.

if annahar is so bad why u still insisting on coming back and plotting strategies ?
signed growup.