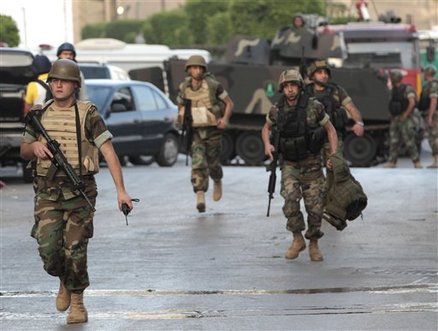 The army on Wednesday detained a man with 37 arrest warrants after raiding his residence in Baalbeck's al-Sharawina neighborhood.

"Ali Youssef Jaafar was arrested on 37 charges that include shooting activities, robbery, kidnapping operations and drug dealing,” the Army Command's Orientation Directorate said in a communique.

"The patrol found a great number of weapons, ammunition and military equipments in the arrested man's house and car.”

The army also pointed out that it found fake car number plates, communication devices and tools used in kidnapping operations in Jaafar's possession.

The military institution's communique added: “Investigation has started with the arrested man by the competent court.”

since they found s much weapons with this criminal, then he must be like asir :) an extremist thug.

here you go a chiite thug got arrested. If it was a sunnite thug arrested, hell would have broken loose among the "sunni street"

How about also dissolving the army ft? HA is doing their job.
Or we can dissolve HA so the army can do its normal job and the ISF can go back to doing theirs as they used to do previously, before they were sidlined by both HA and M8 Cabinet.

Of Course we all must say Great work for the Leb Army, BUT does it really take 37 warnings to this thug before he is caught?
37 Arrest warrants? what happened after the first arrest warrant and do not tell me those 37 were born yesterday...this is exactly what the other camp is saying about impartial and biased justice system. It takes assassinating every political figure to realize that at 37 we should really act and "tafah el kayl" as they say so we should react now?

In Baalbeck a newborn has 37 warrants .... so this guy is innocent!

they can only do this with the agreement of hezbis.....

LOL! try hezbis ... if arrests do not suit them they take to the streets... so please mowaten be honest for once!

they would be the FIRST ones to shoot the army if the army go against their interests...

you are whether naive or brainwashed, but in both cases pityful.....