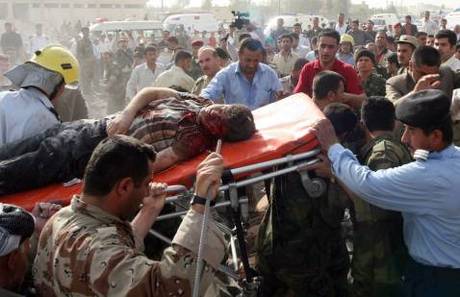 Attacks killed five people in town squares in Iraq on Friday, including four who died when a suicide bomber set off his vehicle rigged with explosives just before midday prayers.

The latest violence, which left dozens wounded, comes as Iraq struggles with a surge in violence coinciding with a long-running government deadlock and months of protests among the Sunni Arab minority.

The deadliest of the attacks on Friday struck Samarra, a predominantly Sunni town north of Baghdad, when a suicide bomber detonated a car bomb near Al-Haq square, a focal point for anti-government protesters for months.

In the predominantly Shiite town of Kut south of Baghdad, a bomb set off in al-Amil square at around 10:00 am (0700 GMT) killed one person and wounded 17 others.

Two militants also died in the northern town of Hawijah when the bomb they were trying to plant unexpectedly went off, officials said.

Iraq has seen a surge in violence since the start of the year, with the U.N. reporting more than 2,500 people killed from April through June, the highest such level since 2008.

The increase in unrest has coincided with ongoing protests in the Sunni Arab community that analysts and diplomats say have boosted recruitment to Sunni militant groups and given them room to maneuver.