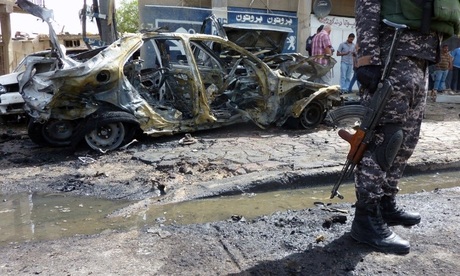 Bombings north of Baghdad on Saturday killed five people, including a police officer, police and doctors said, a day after attacks across the country left 23 dead.

A roadside bomb killed four people west of the northern city of Kirkuk, while another bomb in Tikrit, also north of the Iraqi capital, killed a police officer and wounded two others.

The attacks come a day after 23 people died in a string of attacks across the country, including the bombing of a Shiite religious hall.

Iraq is grappling with a protracted political standoff within its national unity government and months-long protests among its Sunni Arab minority.

Analysts and diplomats worry that the standoff is unlikely to be resolved at least until general elections due next year.

With the latest violence, attacks have killed over 160 people and wounded more than 400 in the first six days of July, according to Agence France Presse figures based on security and medical sources.

Iraq has seen a surge in violence since the beginning of the year, coinciding with ongoing protests in the Sunni Arab community that analysts and diplomats say have boosted recruitment to Sunni militant groups and given them room to manoeuvre.

Iraqi political leaders have vowed to resolve outstanding disputes, with Prime Minister Nuri al-Maliki meeting with his two main rivals last month in a bid to ease tensions, but no tangible measures have been announced.