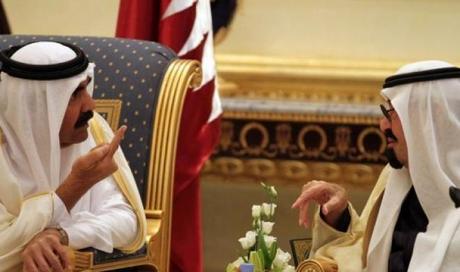 Qatar, a key supporter of Islamists who rose to power in Arab Spring countries, is losing ground in regional politics to Saudi Arabia which appears to have seized the reins on key issues, notably Egypt and Syria.

The wealthy Gulf state had transformed itself into a key regional player but began to retreat as heavyweight Saudi Arabia re-entered the political arena after lagging behind in the immediate period following the eruption of the Arab Spring uprisings in December 2010.

The ouster of Egypt's Islamist president Mohammed Morsi last week by the army and the election by the Syrian opposition of Saudi-linked Ahmad Assi Jarba as new leader stripped Qatar of strong influence in both countries.

"Qatar had tried to take a leading role in the region but overstepped its limits by openly backing the Muslim Brotherhood in Egypt, Syria, and other Arab Spring states," said Kuwaiti political analyst Ayed al-Manna.

"Qatar's Middle Eastern diplomacy now lies in ruins: it failed to produce dividends in Libya, backfired in Syria and has now collapsed in Egypt," local Emirati daily The National quoted him on Tuesday as saying.

Realizing the damaging effects of their policies, Manna noted, "the Qataris sought to cut down on their commitments" which were already affected by the emir's abdication and the sidelining of the influential prime minister Sheikh Hamad bin Jabr al-Thani.

As a result, "Saudi Arabia, a historical regional U.S. ally, regained its role" in coordination with other oil-rich Gulf monarchies, said Manna.

Saudi Arabia's King Abdullah was the first foreign head of state to congratulate Egypt's interim president Adly Mansour, hours after he was named to replace Morsi.

And on Tuesday, the kingdom pledged $5 billion in assistance to Egypt. The United Arab Emirates, which has cracked down on the Muslim Brotherhood in the past few months, offered Egypt an aid package of $3 billion.

"It had supported the Muslim Brotherhood in Egypt but reconsidered this support after the Brotherhood failed to run the country wisely," he argued.

But the Saudi researcher downplayed the rivalry between Saudi Arabia and Qatar, both of which have been looking to expand their influence during the Arab Spring uprisings and prevent any potential revolt against their own autocratic regimes.

"The Saudi-Qatari harmony still exists and there is no battle for influence between the two countries," said Sager. And as proof, "Riyadh was the first to be informed of the political change in Qatar, six months before it took place. And it welcomed it."

But the two countries, whose relations have been historically tense or at least marked by mistrust, support two different approaches of political Islam that emerged strongly in the wake of the Arab Spring.

Qatar sides with political parties linked to the Muslim Brotherhood, whose experience was cut short despite the strong media support they enjoyed from the influential Doha-based Al-Jazeera news channel.

Meanwhile, Saudi Arabia promotes Salafist groups that focus less on politics and more on implementing Shariah Islamic law on daily life matters such as forcing women to wear a veil and prohibiting the mixing between sexes.

"Islam rejects divisions in the name of one party or another," he said in a statement marking the start Wednesday of the Muslim holy month of Ramadan. The kingdom will never accept" the presence of political parties, that "only lead to conflict and failure."

But regardless of the political agendas of Saudi Arabia or Qatar, the people who rose up during the Arab Spring revolts will have the final word on their own political futures, argued former Bahraini cabinet minister Ali Fakhro.

"It is the Arab people, not Qatar nor Saudi Arabia, who will determine the political future of the region."

maybe he is proposing only ONE billion dollars.

because his holiness in headchopping, king abdullah told him "no" to let the muslim brothers rule. geagea was upset too.

Did I say Geagea for president?? You damn right I did...

From what I've heard, Qatar was suppose to fill Saudis shoes until the king dies, but I guess Qatar over stepped, and the Amir was told to step down. He's rich as hell and a hero to his country, more Arab rulers could learn from him on that... Of course not hand power down to their sons tho!