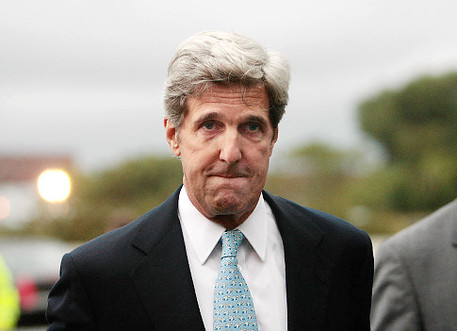 He made his statements after holding talks with President Michel Suleiman at the Baabda Palace.

"I know that President Obama is deeply committed to helping to bring Lebanon stronger democratic institutions that have the ability to represent all the interests of the Lebanese people. I know that our economic and security assistance will continue in the effort to help build those strong institutions," he added.

He also held talks with Prime Minister Saad Hariri, after which he voiced the U.S.' support for the Special Tribunal for Lebanon.

"The era of assassinations needs to end. So we stand in full support of the independence of this tribunal and the ability of Lebanon to move beyond that kind of violent, destructive tool that has been employed," he stated.

"Lebanon doesn't have the power to change the Tribunal, because it was created by the United Nations at the request of this country. So for those who are trying to make it an issue, those who oppose it, they need to think carefully about rule of law, about the institutions that have put this Tribunal together, and what it is trying to accomplish, well outside of your prime minister's ability to affect," Kerry stressed.

He then headed to Syria where he is scheduled to hold talks with President Bashar al-Assad.

"We will look to Syria to play a constructive role in these next days in what happens here in Lebanon," he added.