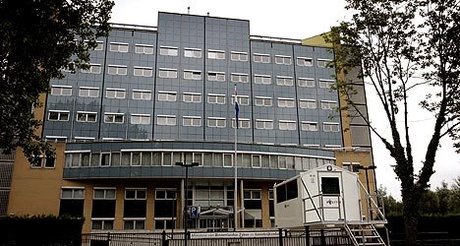 Concerned Lebanese authorities have reportedly been handed the indictment in the investigation into the assassination of former Prime Minister Rafik Hariri ahead of its announcement, revealed opposition circles to the daily An Nahar Sunday.

The authorities do receive the indictment before the Special Tribunal for Lebanon makes the announcement to the public, said the daily.

March 14 camp sources explained that Hizbullah Secretary General Sayyed Hassan Nasrallah’s speech on Friday is evidence that the Lebanese authorities have received the indictment seeing as his speech “did not carry a certain message, took place at the last minute, and was not held on a specific occasion.”

The sources therefore said: “What he didn’t say was more important than what he did say even though he did announce that he is not concerned with the STL.”

In a related development, Justice Ministry sources revealed to the Kuwaiti al-Anbaa newspaper Sunday that the Lebanese judges working for the STL have headed to The Hague.

They interpreted this development as a sign that the indictment will be released during the first week of July.

am going on vacation to leb. on the 7th july so please keep everything calm cause i wanna enjoy it
ma twal3o el dene please
ntaha el bayen

This " fonds de commerce " they have been using for the last 6 years , has turned against them . They are today out of power , in exile and in a very bad shape by all means , because of that joke they call STL . And they keep talking about something that doesn't exist and will never exist .

And they wonder why the Lebanese people in their big majority , dont want them anymore ..!!

What big majority? Slim at best, if it wasn't for the guy you attacked and called cammilion for many years, there wouldn't be a Miqati government.... That is our problem in Leb. Groups trying to cancel others completely!

Did you notice some of the new ministers distancing themselves from Hizballa and siding with the STL in recent days??

that happened because they see teality opposite to le phenicien. with small minded and uneducated individuals like him, lebanon will never have a chance. his future is in mullah-land

hassan trying to open a solution for hizb as he realizes he can't confront the international community,the hizb people indicted will be "spies" or "planted elements",and he escapes with his fatwas.....he should give a hint to the orangy guy how to deal with fayez karam case....

Please hurry up by cutting the 2974-page document, which is printed on fine and soft paper, into squares, to be equally distributed to the city restaurants where they will be used as coasters and in their bathrooms as toilet paper. This is called being Green.

Pray No Lebanese is involved in the Killings of 2005/06 of M14 politicians!

Everybody knows it started it off with the finger pointing at Syria... Hezbollah has no benefit, nor has it ever been it's motive to kill R. Hariri, Samir Assir, Gebran Tueni, Pierre Gemayel, ...

The U.N. Will loose all credibility if Hezbollah is blamed. They won't be able to convince the Lebanese people.

The fool, properly names, and his opinion that Hezbollah had no motive in killing Hariri??? Please! Hezbollah of course had no interest in killing Hariri, Hezbollah is not a player, but a party that is played. It is an instrument of policy, it does not create policy.
The policy was created by Hezbollah's master, Iran, to curb Syrian control of Hezbollah in Lebanon by killing Hariri, expecting that it would result in the Sunni turning on the Syrian occupier and leaving Hezbollah in Lebanon free to serve Iranian interests only.
This happened just as Iran moved to seriously pursue its nuclear development program and needed Hezbollah as an Iranian directed advance brigade/tripwire on the Israeli border to cause Israel to forebear on a preemptive strike on Iranian nuclear facilities.
This is, what I think happened as do most Lebanese who will welcome the indictments as validation of this, as of now, speculation on causation.

I doubt HA did this bomb. Probably the assad regime... Hezbollah with all its defaults is not into creating civil strife in Lebanon. Plus the Assad regime has proved time and again its a petite for savage murder

The truth is coming out soon enough.