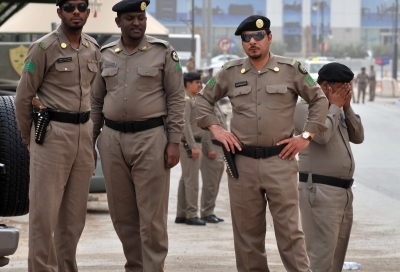 Al-Akhbar said that the man, whom it did not identify, has several companies and factories that employ hundreds of individuals.

He was expelled after a tip off that he sold some properties to people with ties to Hizbullah, the daily added.

The group's backing of the Syrian regime has angered the overwhelmingly Sunni rebels fighting to topple President Bashar Assad.

The Gulf Cooperation Council — which includes Saudi Arabia, Kuwait, Bahrain, Qatar, Oman and the UAE — has said the bloc would crack down on Hizbullah members as part of a joint effort to limit the group's "financial and business transactions."

Hizbullah says the group has no business interests in the Gulf. However, there are more than half a million Lebanese working in the Gulf states, including tens of thousands in Saudi Arabia. Many are Shiites.

No Phil!! We're getting this filth back here!! Please deport him to Iran or something!!

Or just send them to die fighting in Syria...

you people are unbeilievbale, you guys are sittingthere actually prasisng that a man lost his job and was deported on a bigus charge, they had no prrof no evidence and just accusations. I guarnetee that if it was any of you guys in that position you wouldn't be so happy. I feel bad for him becaseu he now has lost his chance to support his family. This is nothing but a witch hunt. I just hope and pray he will be ok

If supporting his family were a major concern for him, he should not have placed support for Hizballah above his family. He got what he deserved.

as reported by al alkhbar.....

as I was trying to say, you have to respect the laws of the country that you reside or work in. You really can't call it blackmail--it is just a law--if you have ties to hizb iran, we will deport you, end of story. Over here, if you have ties to israel, you will either get jailed or deported.

do you consider that blackmail?

Mate, more sodomy in vatican or among priests than in KSA...

Vatican is the crown of your head, Vatican is our reference, the reference of peace, progression and perseverance. The KSA and SAOUDI are the reference to the regression and to the slavery. Don't attack vatican as long as you are not even able to build a bridge without the knowledge and culture that they transmitted to you. So keep yourself calm, Lebanese Templars are back.

exactly, not gratitude or realpolitik thinking.
If not dont like it, stay at home, be it ksa,france or australia.
And lebanese abuse foreigners a lot as well.
@ phoenix : with all respect, u obvious know none about ksa and repeat what u hear. Sodomite get killed if caught in ksa, we all know what frustrated priests do...

cqfd, first talking about sodomy ,then cross. France has right to forbid niqab, ksa crosses and bible, charbonnier est maitre chez soi. Not happy ? Go work somewhere else. U just showed the superficiality of ur knowledge about ksa and iran, and hate/ignorance of Islam, who forbids church in the peninsula...

BS like usual, u always tell the war like u want, but dont mention about LF racketing, drug dealing, killing of innocent christians and palestinians,Bechir being islamophobe/racist or LF lickin israeli boots. And thats proven/documented unlike saudis payin for christian heads...

sodomite is not an insult of course...

"He was expelled after a tip off that he sold some properties to people with ties to Hizbullah, the daily added."

Shou, ma fi fair trial? Is that the Saudi-Wahabi form of justice?

as your hizb iran buddies what they think of trials

--of course, it would help if they would show up first....

what you see is only the tip of the iceberg: starting from now, you will here about daily about people returning.
and for ft:
the GCC are protecting themselves from these terrorists. and before you say that this is a sectarian comment, kindly revert to your continuos assurance that 98% of shia support hizbushaitan, thus making them supporters of TERRORISTS....

This move by KSA is not good for all the Lebanese, I am not HA supporter and the latter brought this trouble on all of us by committing another 2006 war, only this time it is in Syria.

@ Cedre, LF were not bootlickers unlike Sunnis that were hiding behind palestinians militias and syrians and not joinning the lebanese cause. he Shiites were beeing massacred and raped by palestinians in the south. Bachir was not islamophobic he was just betrayed by other fellow lebanese muslim politicians that went to support strangers instead of their lebanese christians counterparts. By the way Bachir and IT IS DOCUMENTATED, refused peace with israel before all lebanese from all sects accept it. And he was killed one week after. Strange? the guy died with 30k in his account and he was the top commander of lebanese forces of 20-30 thousand men. Im not defending that he was sometimes brutal so as the fighters racketeered and sold drugs etc.. but fighters were needed and this is war.

@ Cedre, Christians did not have the choice , and specially because our lebanese muslim counterparts were busy dining with strangers on our land.Today even a small business man with a bit of money and has 5 bodyguards thinks he is god and will act as a leader or something. Bachir used to walk between the crowds unarmed and in civilian clothes while knowing the danger. No lebanese leader exept Rafik Hariri in my opinion , Camille chamoun and Pierre Gemayel ( the father ), had charisma or the will to change the country and giving pride to lebanese everywhere. Not one leader today has an inch of the greatness of these men.

@ The1phoenix, im not a KSA supporter, but chopping heads and putting a price for each one how can they differenciate? my father and some of my friends fathers were in the Kataeb BG Maghaweer Squad, they talked about atrocities theyve seen like chopping balls or ears collecting them in vases or even tying up palestinians and syrians and draining them by car on rocky roads till they die. But never had they talked about this... Anyways what i know is that they left after 3 years of war they were in the Ashrafieh , Ain el rummaneh, battle of hotels Battles but they wouldnt continue as they had seen that there was no cause anymore for the fighters exept money drugs and violating people's rights. Bachir knew that this is why he started disarming them when he became president. Nobody knew the real value of this man. And i guess he didnt know his value as well because he was so fearless that he got blown away.