Williams Reminds Miqati of U.N. Chief’s Expectations from his Cabinet 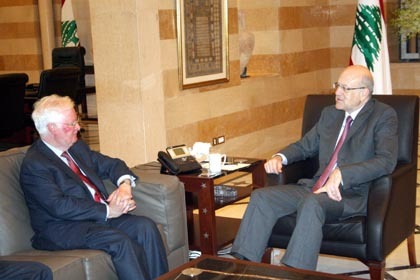 “I reiterated my expectation and the expectation of the Secretary-General that the government will restate its full support and commitment to the full implementation of 1701 in its ministerial declaration,” Williams said following talks with Prime Minister Najib Miqati at the Grand Serail.

“Miqati has expressed to me on several occasions his personal commitment to this resolution and to the work of the U.N. and of UNIFIL,” he said.

He restated Ban’s expectation that the government’s policy statement contain a clear commitment to all of Lebanon’s international obligations.

Williams met with Miqati at the Grand Serail for the first time since the formation of the government.