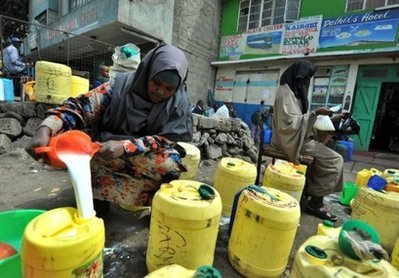 For the tattered-clothed young men in this remote community, milking a camel's stubby utters at sunrise is not a novelty, but a daily chore to get milk valued by their tribe for generations.

But camel's milk, long-cherished by the Cushite people of central Kenya, is now enjoying a renaissance in the capital Nairobi and could, some say, become an internationally coveted health food product worth 10 billion dollars a year. "Camels are better than cows because they can survive when there is drought, but the cows cannot, so I can make a profit even during dry season," said Halima Hussein, 45, whose 84-strong flock makes her a local camel-mogul.

"I'm going to sell to sell some of my cows to buy more camels," added Hussein, whose family also owns 120 cows.

This arid region in central Kenya, like much of northeast Africa, has in recent years been hit with less predictable and more intense droughts, hindering cow's milk production and boosting the value of camels.

In Isiolo, some 280 kilometers (175 miles) north of Nairobi, Hussein and the 63 other women in her local cooperative currently send between 3,000 to 5,000 liters (quarts) of camel's milk a day to markets in Nairobi's Eastleigh neighborhood.

Following this unprecedented demand, the Dutch development organization SNV, which helps the women sell their milk in Nairobi, has suggested opening a milk bar in Isiolo, perhaps to introduce visitors to the unique flavors of camel-based diary.

The Somali, Oromo and Borana tribes -- all part of the Cushite group -- provide a reliable base of customers at Nairobi's hectic markets.

But some insist there is a chance to turn this once ignored type of milk into a high-end health food product sought after on every continent.

"There is already a high demand for camel milk in the developed countries," said Holger Marbach, a German national who founded Vital Camel Milk, which makes yoghurt, ice cream and other camel's milk products.

"Camel milk is slightly saltier than cow's milk, three times as rich in Vitamin C and is known to be rich in iron, unsaturated fatty acids and B vitamins," according to the UN Food and Agriculture Organization’s website.

Even though Starbucks has not yet introduced a 'camel chai latte,' the milk remains a hugely important food source for a community regularly hit by devastating drought.

"I feed my 12 children on camel's milk," said Safia Kulow, 40, who is president of the Isiolo women's cooperative.

Daniel Muggi, the official in charge of Isiolo livestock at Kenya's Ministry of Agriculture, argues that the milk's nutritional value, and the ability of camels to produce it regardless of the weather, may enhance its popularity.

"Circumstances force people to change and non Cushite communities are considering camels because of lessons learnt from the drought and famine here," he said.

"I'm not saying people should abandon all the other types of milk, but I am saying camel milk is the savior of the pastoralists during the dry season."

While they welcome the surge in camel interest within Kenya, locals in Isiolo sound anxious to look beyond the domestic market.

"In the future, we are thinking of getting a camel milk factory," said 56-year-old Adan Ali, the only male member of the Isiolo cooperative.

"We think camel milk will be gold, because we will start exporting to the European Union," he said.