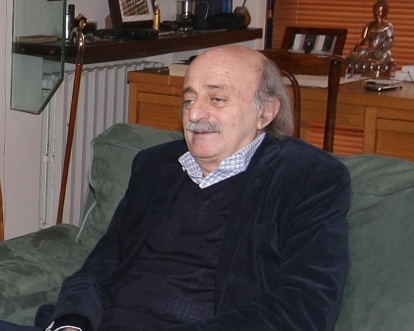 According to As Safir newspaper published on Wednesday, a dinner banquet gathered two days ago Jumblat and Arslan.

The talks between the two officials focused on the decision to extend Qahwaji's term.

The newspaper reported that during the banquet Jumblat also contacted Franjieh, after a long broken off ties.

It described the telephone conversation as “friendly.”

“Extending the terms of Qahwaji and (Army chief of staff Lt. Gen. Walid) Salman is a necessity amid the delicate situation and to prevent any vacuum in the military institution,” Jumblat told As Safir newspaper.

He pointed out that the “army paid the price to maintain stability and shouldn't not be subjected to vacuum.”

Salman's mandate expires on August 7, while Qahwaji's term expires on September 23 when he turns 60 – the retirement age for army commanders.

What you so called politicians need to fix your problems & disputes first . As far as for the Army I think they should take over control not only on our streets & borders but also our Parliament ! You are worse than Ali baba & his forty thieves !

I repeat, when will we see an end to Feudalism in Lebanon?

An unfortunate reality that we see in Lebanon is still the troubling and destructive habit of following feudal leaders and families.

The Beiks, Mirs, Shiekhs, Afandis, Aghas and Bashas etc who hold these titles from when Lebanon was occupied by the Mamelukes and Ottomans still have a following and still influence in Lebanese politics.

When will the Lebanese realise that these people were not given these titles and the lands that they own because they were good people. But rather they were collaborators with the Mamelukes and Ottomans against their own people.

They used to be the eyes and ears or the occupiers and their past, present and future is stained with a lot of irrecoverable damage that did to Lebanon and its people.

What is even more disturbing, is that many of them take pride in their family titles when in fact if they had a shred of honor, they would be ashamed and embarrassed of such a past treachery.

youngheart and the1phoenix .. With you 100% when it comes to the way you view our corrupt politicians, and the role of the army taking over. I just wish this becomes reality.. We need it badly.

Let's find solace in the fact that many of these dinosaurs are getting quite old and are beginning to be replaced by a younger generation less corrupt and more capable. Most politicians haven't got any adequate educational degrees and the like and so are still in the feudal mentality that's as remote as possible to how a politician's approach should be -- with them, there will be no solutions in this relatively civilized world -- and so they're in need of being eradicated. Not anytime soon, but in our lifetimes for sure.