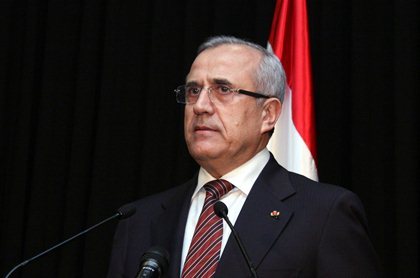 President Michel Suleiman stated on Thursday that the explosion in the southern suburb of Beirut “bears the hallmark of terrorism and Israel.”

"I condemn the terrorist Dahieh explosion that aims at shaking stability in the country and the Lebanese people's resistance,” Suleiman said in a released statement.

He added: “The explosion bears the hallmark of terrorism and Israel and it targeted civilians and innocents to deliver political messages.”

Beirut's explosion will not, however, change the principles and the values of the Lebanese, Suleiman noted.

"It must instead motivate political leaders and Lebanese citizens to stand united under the ceiling of the state,” he commented.

"The blast targets the entire nation and all the Lebanese people, not solely the southern suburb of Beirut.”

The president called on security, military and judicial bodies in the country to intensify their investigations and unveil the assailants behind the attack.

"We also demand strict monitoring of regions that are vulnerable to similar attacks and of the border.”

At least 14 people were killed and 212 others wounded in a car bombing that rocked Hizbullah's stronghold in Beirut's southern suburbs on Thursday afternoon.

The blast went off on the public road between Bir al-Abed and Ruwais, according to several television channels.

really sleiman ?Israel ? come on Bro, u were on the right track, ma tkhabbes man. we support you and think u are a great leader, ma tenza3a. u were better off just condemning the attack without pointing fingers at this stage, till HA figures out who did it ( knowing that the government has no right to investigate there )

It's either Hezbollah (or assad) tricking the public opinion - most likely
Or it's pro Syrian rebels (or salafi terrorists) that managed to reach the heart of the terrorist headquarters.

You know that my grandma slipped on a banana last year and it was Israel who put it there?
I also fell on the stairs.... It was an Israeli evil eye on me.

Benzona, your not funny. It might be the moon, or the sun or a monkey that ran away for the zoo but never israel because israel never kills innocent people. Tfeh on scum like you. Always ready to whitewash the terrorism of israel who deliberatly has killed so many children and civilians that i have lost count. If you think its stupid to accuse israel who is a specialist in creating fitna and murdering people then just imagine how stupid it is to declare their innocence when it comes right after 4 of their soldiers were injured in lebanon. Again tfeh we malyoun tfeh.

I like the confidence in your words, I vote Benzona for president. heyk heyk we don't have a country :)

You lost me Mr. President. So, the bombs thrown at your palace earlier somehow changed direction and hit Israel? So, now Israel takes revenge against H.A.? Or may be it is Israel that has infiltrated Lebanese politics and telling the so called elected ones what to do and say. Not Iran/H.A.?

how was ur day hermano? Did u meet up with friends at the mall? :)

Boring. Nothing interesting going on.

Come on! We all know that if our Iranian lapdogs were not fighting in Syria none of this would happen/

..and maybe they will all be wiped out in Syria and free us from their cancerous reach.

It is not worthy of a president to throw accusations. Yes, both Israel and sunni extremists have a motive, but let investigations take its course. Regarding the hallmarks, an indiscriminate bomb in a civilian area in "peacetime" is closer to the sunni-fanatics than to Israel who in such times prefer more targeted operations. Even Hezbollah knows this, but it will prob be convenient for them to accuse Israel to gain internal support.

Stop blaming Israel for everything. This is idiotic. Or, we will pay dearly.