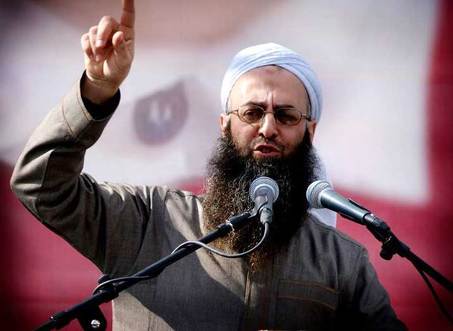 Fugitive Islamist cleric Ahmed al-Asir on Monday noted that the deadly Ruwais bombing was “a normal result of the crimes committed by (Hizbullah chief Sayyed Hassan) Nasrallah and his party against our brothers in Syria."

"Nasrallah used a provocative rhetoric to secure further hegemony over the Lebanese,” Asir said, referring to the speech delivered by Nasrallah in the wake of the blast.

"Several critics of Nasrallah, who had accused him of dragging Lebanon into an inferno, have swallowed their tongues due to their cowardice and fear," the cleric added in an audio message posted on the Internet, the third since he went into hiding after the deadly Abra battle.

He pointed out that “the Dahieh bombing is a normal result of the crimes committed by Nasrallah and his party and their supporters against our brothers in Syria -- in Qusayr, before the Qusayr battle and after the Qusayr battle."

Asir accused Nasrallah of seeking to "take advantage of the Dahieh blast" to "threaten all the Lebanese, especially the Sunni community."

He claimed that Syrian rebels did not fire "a single gunshot against Hizbullah or any of the Lebanese prior to the Qusayr battle."

"By accusing the Takfiris, Nasrallah is using a term that can be interpreted in several ways with the aim of subjugating all the Lebanese and justifying his crimes,” Asir added.

“You said through your deceptive rhetoric that whoever accuses Sunnis (of the Ruwais blast) is an Israeli agent. This rhetoric has fallen, as you are rejecting both the liberal al-Mustaqbal Movement and the religious Sunnis who stand against you,” he went on to say, addressing Hizbullah's leader.

Asir warned his "brothers" in Majdal Anjar, Tariq al-Jedideh, Tripoli, Akkar and Dinniyeh that Nasrallah "will use the intelligence agencies to fight you under the excuse of Takfiris."

"Enough with your lies ... our brothers (in Syria) are not idiots, the idiot is the one who has stood by the butcher in Syria and jusitifed the crimes of the criminal (Bashar) Assad," he added, addressing Nasrallah.

Security information revealed on Monday that some members of a car bombing ring detained on Sunday are supporters of Asir.

Eight people, of Lebanese and Palestinian nationalities, were found involved in the scheme to detonate a booby-trapped car that was found in the town of Naameh, south of Beirut, As Safir daily quoted well informed sources as saying on condition of anonymity.

All the people involved in the alleged scheme are under monitoring, and investigators have circulated their photos in a bid to tighten their movements, the source told the daily.

The Naameh plot was to be the first of a series of attacks, the source added.

The gunbattles concentrated in the area of Bilal Bin Rabah Mosque and nearby buildings in Abra.

On Thursday, 25 people were killed and around 300 others wounded in a powerful car bombing that rocked the Beirut southern suburb of Ruwais, a Hizbullah stronghold.

Asir accused Nasrallah of seeking to "take advantage of the Dahieh blast" to "threaten all the Lebanese, especially the Sunni community."
>>>> anyone who heard the speech knows he clearly made the distinction between Sunnis, whose sheikhs and people have been targetted by takfiris as much as shias, and the takfiri monkeys.

He claimed that Syrian rebels did not fire "a single gunshot against Hizbullah or any of the Lebanese prior to the Qusayr battle."
>>> hahahah yea right, the rockets on hermel and the massacres in border villages were just a result of collective hallucinations

"By accusing the Takfiris, Nasrallah is using a term that can be interpreted in several ways with the aim of subjugating all the Lebanese and justifying his crimes,” Asir added
>>>no habboub, it's not because you're an ignorant who doesnt know what takfiris are exactly, that others are like you. we know EXACTLY what a takfiri is.

yes phoenix, i know you dont like assir, but you also know i believe HA is necessary to defend lebanon, we have seen, not just theoretically but factually, that there was a very real threat and that they were the only ones to be able to put an end to it.
your metaphor is like saying if there werent successful people there wouldnt be jealous people, so let's eliminate success in order to eliminate jealousy, i don't agree with that.

HA adventurism and starting a war with Israel =/= defending Lebanon. Funny to see the Hezbos talk 7 years after when we all remember in 2006 how you all left the south and were cussing SHN...

May god bless assir, he is just hiding from his weakneseess,

Sheikh Asir lost my support the day he armed himself...

But what he says is common sense.... Nevertheless, he belongs in a jail cell where he should await his judgement. But the top top priority is Jamiroqai the monkey-rat, going deeper underground. He must be found before he manages to dig his way to China.

Israeli enemy, if you read this.... Help us for once by using your drones so he may pay a visit to sheikh Ahmad Yassine (ASAP). It would be a GREAT step Towards achieving peace in the middle east.

never supported the guy, it was easy to understand that he was goin to fall in hezbos trap. He is like a doctor that knows how to do a diagnosis but give the wrong treatment. HA dreamed of a fool like him...

And no, Cèdre and I are two different persons. I'm please to see we share common values but this is where it ends. Ce qui me fait penser au vieil adage que tu dois très bien connaître FT : qui pense mal agit mal!

Phoenix: don't be a khafeef like FT, Cèdre and I arent one and the same person.

Calling on israel to fight a battle in your name is just as disgusting as supporting hezballah and alqaida. Yes what a lovely peace that would achieve. Tens of thousands of hezballah running around lebanon revenging in the name of hussein. Israel, hezballah and alqaida and the arab regimes are all from satan and none of them will ever achieve peace since they are doomed qnd eventually they will have to pay the price.

Yes dst, I also strongly believe that resorting to Israeli help is bad. look at how low the Lebanese confidence in their institutions and themselves has fallen.

Where do you stand? What path do you suggest? Criticizing is easy, but you need to come up with a solution if you're to criticize anyone. Am I wrong?

If you support M14, you support Al Assir.
Remember how Seniora and Bahia jumped to his defense and went on a rampage of the great LAF?
M14 cannot be excused from supporting such low life groups.
Justice will prevail when we have an independent justice system.

benzona needs a stress ball, dude get off the politics and read some dalae lama

I actually see this idiots point but him and hizb are still evil scum and must be ousted from Lebanon,
Partirion please.

Yep! (but without the partition)

if evil scum is ousted, do you still need to partition?

Assir and Nasrallah. Same scum. Only Nasrallah is on the winning side and can afford to play classy and calm while Assir is the underdog and has to bark to be heard.

When will our country be liberated from those medieval figures and have us focus in what matters to us, like economics, the environment, social growth?

Try selling your BS to the families of the 2 Turkish pilots held captive in hizballastan...

20 hizbos just got killed in damascus, good news for syria, lebanon and the world...

Cedre ,hopefully Israel will do the rest of the job ,and she ll finish this cancer called nasralla & hizballa from lebanon,face it only Israel can do the job and no one else unfortunately

Well said chukri,because no one is really able to remove the HA from lebanon,and only the zionist will be able to do so,hopefully soon

3ayb to talk that way about any Lebanese

Look how these M14 tools back this dirt bag up. You guys defend him like he's part of your families. This piece of crap use to deliver water to stores in Saida and then all of a sudden he's preaching his disgusting version of Islam.
Keep cheer leading M14ers. They'll be nothing to cheer for soon.

From dyala to beirut dawlat al islam fi iraq wal sham will CUT ALL THE HEADS OF SHIA FARSI RAFIDAH!!!!!!! We will kill you and take your homes!!!!! We are the sunna MUJAHIDIN will clean Da7ye of Shia FARSI rafidah BRODERS of yahud !!!! We will take all your belongings and we will steal your bodies to burn them ALIVE!!!!

How did this even get approved?

Cute, M8 now creating fake posts to try and slander us. Too bad this is the actual rhetoric of HA (just replace some of the words her and there).

The mere fact that you're even comparing the two shows how little you know. Did you get you're education from a sukleen employee. I'm afraid you're lack of knowledge is beyond repair.

Tell us something we couldn't predict and do not know, but you are still killing each other.

Did you guys notice that nowadays the only political leaders who open their big mouth are the ones in hiding underground(Nasrallah) , or on the run (Asir)
Poor Lebanon....

Assir should be hung, and nasrallah and his group should be dismembered.

ft
yes anyone who uproots this Iranian terrorist militia is more than welcome.
do you really believe there is a single Lebanese that would not welcome that?
you would be really naïve.

Yeah... Absolutely
By the way, where did he get the money to buy a Rolls Royce?

Thank you al-Asir, aka Dr. Arreet 7akeh's spokesperson when the Doc of Bull is busy communicating with the supernatural. He's not only the Doc's "minnohou" but also his "metlohou."

@ Geha
May I suggest a few more to add to the list of hanging??