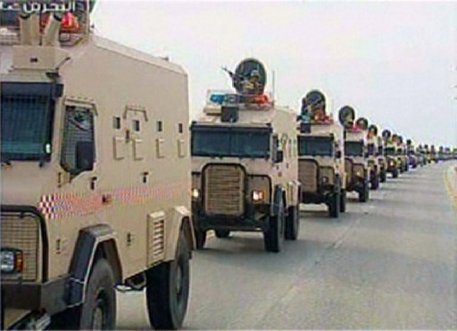 Kuwaiti naval forces on Saturday ended a mission to secure Bahrain's maritime border they began in March amid a crackdown on Shiite protesters, the official KUNA news agency reported.

"The Kuwaiti naval task force in the Kingdom of Bahrain ended today (Saturday) its mission to contribute to the protection of the maritime border of Bahrain and securing it in cooperation with the Bahraini navy, which began in March," KUNA said.

The announcement came the same day that Bahrain opened a national dialogue said to be aimed at re-launching political reforms.

Saudi Arabia deployed about a thousand troops to Bahrain in March while the United Arab Emirates sent some 500 police -- deployments that freed up Bahraini security forces to crush a month-long Shiite-led protest movement calling for reforms in the Sunni-ruled, Shiite-majority kingdom.

A Saudi official said on Tuesday that the Peninsula Shield force of Gulf troops sent to Bahrain were to be "redeployed" but will not withdraw completely.

Kuwaiti Sunni Islamist MPs had announced before the naval deployment that they would move to question the prime minister in parliament for not sending troops to Bahrain.

we repeat and reaffirm:from bahrein to beirut all farsi fingers will be cut.
that includes their affiliations too.
bilad el arz are prevailing

Mustapha...The Israeli enemy loved your commects. why don't you turn your scissors toward your Israeli enemies who are occupying your land and humilating you. If the Sunni head of states were not worthless puppets of Zionist America..Hizbollah would never have existed. I never before mentioned sects but when sectarianism is used by American puppets to go after the minorities in the region while they act slavishly toward Israel and Zionist America...then those people need to look in the mirror.

The king of Bahrain is an American puppet who loves Israel and is allowing America troops to stay in the gulf to support Israeli domination of the middle east. Unlike you and the zionist puppet kings, most Sunnis consider Israel not Iran as the enemy.

Democracy is an essential element for progress in all Arab countries, including Bahrain, Saudi Arabia, etc. All freedom loving people should support these movements anywhere they occur.

Unfortunately, the negative experience of the Shiaa Hezbollah in Lebanon backfired on these minorities because of the justified concern that Iran is manipulating the Shiaa communities to dominate the region, as they've done in Lebanon and Iraq. Until Iran/Hezbollah are neutralized, even the legitimate Shiaa freedom movements will suffer.

It is interesting how Zionists here like Startrip totally avoid mentioning Israel and try to create divisions among Lebanese and Arabs. It will not work. As John said, most Sunnis hate Israel not Iran. In 2006, the entire Sunni population were cheering HA against Israel, while the Arab tyrants were criticizing HA. One of them is gone...Mubarek. All Arab pro American tyrants will be overthrown before the Arab spring is over. When Israeli criminal state is eliminated than there will not be a need for the resistance.