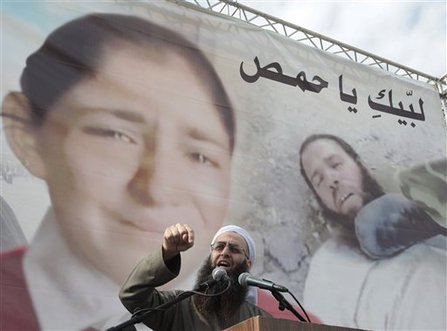 Fugitive Islamist cleric Ahmed al-Asir on Tuesday warned Christians that bombings might target their areas, citing Hizbullah chief Sayyed Hassan Nasrallah's latest speech, in which he said that Takfiris might target any Lebanese region with the aim of inciting strife.

In a new audio recording uploaded to the Internet, Asir extended condolences to “our people in Tripoli, (Syria's) Ghouta and Egypt,” in reference to the twin bombings that left 45 people dead and more than 500 injured in the northern city and the alleged chemical attack near Damascus.

"Every prudent person has become deeply convinced that the Iranian-Syrian camp and their tools in the region are behind this criminal act (in Tripoli) and at least they are the prime suspects,” Asir, on the run since the deadly Abra battle, added.

“This camp is the prime suspect in this crime, whether it was executed by (Hizbullah), the Syrian Social (National Party), the Baath (Party) or the likes of (jailed ex-minister Michel) Samaha,” Asir went on to say.

“It is important not to cover up the truth as some have tried to do thinking that they would be protecting Lebanon from strife,” he added.

Asir stressed that no one can convince Tripoli's residents that Nasrallah's speech had nothing to do with the deadly bombings, noting that attacks cannot put an end to their support for the Syrian uprising.

The fugitive cleric said Nasrallah “must be held fully responsible for what happened in Lebanon and what is happening at the moment, whether against his sect or against the other sects.”

"I tell our Christian partners to be very cautious because (bomb attacks) in the vein of of what happened in Tripoli and Dahieh might target their streets so that Nasrallah can prove his words that no city or sect will remain safe and that the Lebanese must defend themselves against Takfiris," Asir added.

Sheikh Ahmed al-Gharib -- a suspect who has been arrested in connection with the Tripoli blasts and a member of a pro-Syria Islamist group -- has confessed to his prior knowledge of the bombings and to Syria's involvement in the attacks, according to a report published in al-Joumhouria newspaper on Tuesday.

LF and Kataeb are wholly-owned subsidiaries of Saudi Arabia and will do as they are instructed by their khaliji masters.

I don't understand how you can accuse LF and Kataeb of being subservient to Saudi Arabia when HA is nothing more than an extension of Iran. Perhaps Saudi Arabia finances and, thus, influences LF and Kataeb policy, but HA has a much stronger ideological attachment to Iran, which is not even an Arab nation. How can you even bring this up and not realize how nauseatingly hypocritical you sound?

Phoenix, I'm sure you better than anyone know that geagea is not 1% of the man Bashir was... he never hesitated to murder, even from his own camp, every time he felt a competitor rising... you think a man like that cares about anything but himself?

Sadly, this fugitive speaks the truth, whilst the "legitimately" elected people accuse Israel.... It obviously is BS. Bachar is behind them, with our without Hezbollah's approval or help.

I have to say Asir is speaking what we all believe is correct. The regime is the head of the snake and hopefully soon the head will be separated from the body and the venom will no longer be lethal. The Baath party got way with SO MUCH… It is time to take it out of existence. Then and only then Zahle_nghts1 will be popping the champagne...

Will you invite us? lol

I tend to beleive that the west will keep Israel's ally alive, just weakened. Hopefully FSA, with the GCC and turkey's help will finish the job..... But it's a wish.

benzona, I definitely will.. I will be on Berdowni..

will you invite me as well? I certainly would enjoy celebrating this event

U mentionned my name? I'm here!

¿ wat's with these terrorists saying 'labyk' ya Hums or Nosralla ?

if u r not happy about Naharnet, go away! nobody forces u 2 stay here.

Whats with M14ers supporting this dirt bag after her killed members of our beloved Lebanese Army???

BRO HAHAHAHAHAHAHAHAHA YOU ARE SO FUNNY !!!!
you do realize that the people who are the most devoted to both lebanese independence and lebanese prosperity are the M14ers
they are not followers of any country they are people devoted only to lebanon , they are people who care about lebanese they are people whom will always protect lebanese people of all religions. did you forget the 5 year occupation under bashar's rule ? maybe it was easier for you but to us it wasn't... you are either stupid , delusional , or suffered from amnesia im not sure

Well, we can agree it was either Syria, or Israel. If they would both just leave us alone...

What a terrorist kerr!!

M14s love affair with Assir is disgusting. You guys should be ashamed to even call yourselves Lebanese. Tffhhh

I agree strongly. Simply because he is antagonistic to HA does not mean he is good, they're not mutually inclusive! You're guilty of hypocrisy here, when for example, you accuse those of being against terrorism as being aligned with HA/Al-Assad; the two aren't mutually inclusive.

If one believes Geagea to be truthful; stay with him and his extolment and veneration then, do NOT do so for the terrorist scum who killed more than a dozen of our LAF personnel; he is not worthy. Stop bloody idolizing an enemy of the state!

How do you call it a love affair when most M14 figures have denounced him? What kind of weird love is that? All I've heard from M14 is that Assir is no different than Nasrallah, so both should be removed. M8 supporters have latched on to Assir's legacy in an attempt to discredit M14, when in reality every M14 figure, even the Hariri clan, have spoken up against him. Direct us to a single M14 statement that you consider as substantiation for this purported "love affair?"

A day in Lebanon: Syrian regime and its affiliates infiltrate Lebanese territory, kill and massacre Lebanese citizens, rape Lebanese women, steal Lebanese public monies, etc. Meanwhile, Israel flies a drone over South of Lebanon which makes a loud sound. Reaction of Lebanese authorities? File a complaint with UN over the latter. Good to know those in charge have their priorities straight!

I'll never forget the posted sign I saw when I visited Baalbek in the 1990s: "The Syrian and Lebanese Ministries of Tourism Welcome You." On that day, I thought to myself that if there is justice in the world, the Syrian regime will one day die a violent death. Thank God that the end is near. Unfortunately, dictatorial regimes, by their nature, allow for terrorism to exist in order to justify their own existence as "defenders" of the state. Their demise begins to take form once the power and influence of the terrorists reaches a critical mass. This is the sad consequence that we're now witnessing.

Hey Tiger, I think I remember seeing you one of those years at the Beirut airport helping me with my luggage. Wow it's great to hear from you again. I hope you haven't spent the entire 5000 lira I gave you. Anyway, I didn't even mention Rafik Hariri, so I'm not sure where you got that from. I guess you're implying that Rafik Hariri allowed the Syrian regime to prosper in Lebanon. If he did, he was wrong. He's dead now, so it doesn't matter. However, HA is still alive and instead of just putting up pictures in the airport, they use it to run their honorable operation.

it is sad indeed, to see there are worms to follow such a disgusting figure.