Ammar to March 14: You are Not Our Enemies, But the Americans and Israelis are 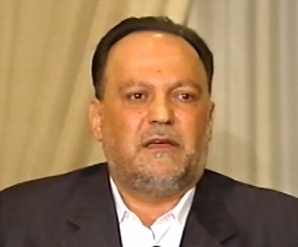 Loyalty to the Resistance bloc MP Ali Ammar stressed on Tuesday that the Americans and Israelis are Lebanon’s only enemies, reassuring the March 14 camp that they are not considered as enemies of the March 8 camp.

He said during the parliament session aimed at discussing the cabinet’s policy statement: “The American enemy created strife in Lebanon and the Arab world.”

“Since day one, the Resistance was subject to these enemies’ attempts to eliminate the weapons,” he remarked.

“While listening to all these speeches, I began to wonder, has Prime Minister Najib Miqati, the son of Tripoli, become a member of Hizbullah without my knowledge?” he asked in reference to March 14 MPs’ criticism of Miqati and the government policy statement.

Ammar added that the assassination of former Prime Minister Rafik Hariri cannot be compared to any other crime.

“The martyr represents that entire ummah and not a sect or country,” he stressed.

Addressing MP Marwan Hamadeh, he said: “The July 2006 war was aimed at executing the Resistance, but it failed. It did not fall for the traps of strife that were set up for it.”

He concluded his fiery speech by granting the cabinet confidence.

the americans are not our enemies the israelis and the farsis are,
the faqihi doctrine in our lebanon will not pass becose we will not give it the time to encroach itself.
n.b. the aounis have not the stomach for iran,they want only to bother hakim,i think u know that.

I love the fact that they call themselves "resistance", and "loyalty to resistance bloc"... WHAT RESISTANCE?? They haven't fired a single bullet since 2006,and are confined 30km from the border!
The last bullets THE RESISTANTS fired were in 2008 against the Lebanese people!
Resistance my A-- !!

The longest speech of the day and only three excerpts on Nahar. You're as impartia as that STL of yours. Well, what matters is the vote of confidence will prevail and the whining will continue.

I'm an American, and I'm not anyone's enemy. It's really troubling to see people painted with such a broad brush.

America are your enemies ay???? What about the millions of $$$ in military funding that enemy contributes to the Government of which Hezbollah is a part of???

Just a dumb thing to say by this joker.

Your 'enemy' the USA gives you multipal millions of dollars of aid, USAID launched the second phase of the Lebanon Investment in Microfinance (LIM), a $12 million program that provides grants to Lebanese Microfinance Institutions (MFIs) that offer loans to small businesses and farmers working in agribusiness, tourism, and information and communication technology sectors.

If they are your 'enemy' why don't you refuse all US aid, quit being a hypocrite.

You and hezbollah are our true enemies. All what you have done is spilling lebanese blood for the sake of the Iranian regime.
You have a virulent ideology that, if applied, will put to shame most totalitarian regimes and religious extremist rulers.
Our enemies are the Iranian and the Syrian regimes who do not hesitate to liquidate whoever objects to their ways including their own people.
Our natural allies are all moderate countries and the US with whom we share the same ideals of freedom and justice.
You can posture as you wish but at the end the ship you are sailing on will sink and freedom will ring across the Middle Est very soon.

As a Lebanese-American, with both Lebanese and American citizenship, I would like to say that America is NOT my enemy. Hezbollah and the governments of Syria and Iran are my enemies. I have lived in Lebanon since the year 2000 and I have witnessed first-hand Hezbollah's endless bombing campaigns and attacks on law-abiding citizens. I would pick America any day over Hezbollah and its bearded thugs.

Yeah, the Americans are their enemies....heheheh! Guess where Berri's and most of the shiite resistance pro hierarchy's children go to college? It is a country called the U>S>A....!!!!!!

Without US political, economic, and military aid to Israel...Israeli terrorist state can not threaten any one. If Israel is the ONLY ENEMY of the Lebanese than AMERICA is the main ENEMY of the LEBANESE.

Sorry Mr Ammar but our real ennemies are March 14 and on their head is Saad Hariri & Fouad Siniora and all the members of al mustakbal .

Comparing to them , Israel and USA are our friends , they never did as much harm to Lebanon as much as Rafik Hariri and his son & family did and his aid and successor the thief Fouad Siniora & co .

Stop being politically correct with these Bas ... dont forget , they tried and still try to kill US all .

Those who say that Israel is the enemy (ALL LEBANESE) but, not America, are total hypocrites. If it was not for America, Israel could not have massacred Lebanese civilians!!!

The USA has done more to help the Lebanese people than Hezbollah.

US AID every single year is massive and non sectarian.

The US has not shot Lebanese citizens in a 2008 street war, the US was not rsponsible for MASSIVE destruction to S. Beirut and South Lebanon in 2006.

HEZBOLLAH is the enemy of Lebanon. Hezbollah.

"Lebanon must be saved, because it is right to save Lebanon; a nation which cherishes American principles and human values that we all believe in."

be careful ammar, a traitor and spy is your closest ally now! remember your friend AOUN said this!!!

Could anybody explain to me why the USA (and the west in general) is my ennemy?
If so, then you should also explain why Berri has major investments in the US and not in the south of Lebanon. And why mikati studied in Harvard. And Bashar studied (but did not graduate) in England.... I defy anybody to take a poll in any Lebanese university as to where these kids prefer to go: the US, western Europe or Iran.
You are jealous of the American way of life, their freedom, their wealth....
By the way you should send your spies to ce and see who are the most numerous customers in Jemayze and Monot?

Mass-murderers are our enemies; whether they come from Bir el Abed, or Tel Aviv, or Damascus, or Texas, or Tehran, or Kabul. You're all nothing but killers, putting kohl labeled "freedom" and "resistance" over your eyes to look like pretty warriors. It's neither the "Shiites", nor the "American" people (unless they have a low enough IQ to not see beyond your makeup), nor even the "Israeli" or "Iranian" or "Syrian" people; it's you bloody tyrants who use your people as human shields in your political games that are the enemy. Enemy to all and one alike.

When i was in lebanon i couldnt get a job. I came to the US and got a job a house and am living so free from your zaaranat. The US taj rasak. ungratful you are. all the millions they sent to lebanon and thats not enough? and the us is bad? You are jealous thats what it is. Your boss basshar kisses the boots of the americans every day.Do you think the americans forgot about the us marine massacre ?they never forget . they will punish you sooner or later.
Look at beladin. . You hate yourself because the americans dont like you. you are shitting bullets. You are dealing with the most powerful country on earth. wait and see.

I don’t think anyone is your enemy Mr. Ammar,
Your arrogance, your way of dealing with others, your thought of supremacy, your leaders finger pointing and yelling and screaming in the media, you & your friend the General who think you are gift of god to Lebanon ‘ my way or the Hwy’ attitude and many more
Are your enemy sir.
May be you all need to get back down to earth and listen to the other side then you might get support

actually he's wrong. march 14 IS our enemy. what he wanted to say, is that people who vote for them are not. they are just misguided, too traditional to think outside the sect, or plain stupid. or in the case of shab, traitors.

So if you are not guilty at least higher a good lawyer, or at least a free one will be provided to you, and see where the evidence take you. Hizballah acting as they were guilty. The innocent is not afreaid of the truth. Hizballah only supported the STL because they had no choice and they did not think it was going to cover anything. There is too much evidence pointing against them. If you loved Harriri hen you must support the STL to cover the truth. Now it looks as though Hizballah and Israel are both the free Lebanese enemies.