Makari to March 8 Camp: Act Responsibly as the Lebanese, Entire World Will Judge You 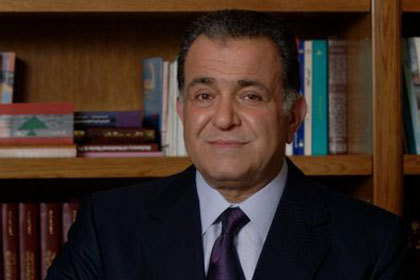 Deputy Speaker Farid Makari hoped on Tuesday that Prime Minister Najib Miqati had not accepted to head the new government “even for three seconds”, saying that cabinet belongs to Syria and Hizbullah.

Addressing the March 8 camp, he said during the parliament session to discuss the government policy statement: “Act responsibly and don’t blame others for your problems: The Lebanese people will judge you.”

“History will judge you and it will confirm your guilt. You will become accomplices in the crime and assassinate former Premier Rafik Hariri and all other martyrs all over again,” he said.

On the clause on the Special Tribunal for Lebanon in the cabinet policy statement and the use of the term of “in principle” in phrasing it, the deputy speaker stated: “The statement indirectly implied that the STL’s findings will negatively impact Lebanon’s stability and civil peace.”

“This play on words is playing with fire and it will burn you fingers and the fingers of Lebanon,” Makari warned.

“Your game is exposed and shameful. It will not deceive us or the world,” he stressed.

“You should honestly announce your support for the tribunal and trust in its findings,” he added.

“I was not expecting that the head of the government would set Lebanon back to the phase prior to 2005,” Makari noted.

“How can the cabinet create affinity among the Lebanese when it is a cause for division?” he asked.

The deputy speaker concluded his statement by withholding confidence from the cabinet.

Mr. Magari has a popular Italian song that describes him well, Watch it here:
www.youtube.com/watch?v=GOpfI7fZcLM
The Lyrics in Italian are here:
www.lyricsmania.com/magari_lyrics_renato_zero.html
It basically says this about Magari:
Maybe it's my turn
take care of your day
wake up with a cup of coffee
and tell you that never gets old ...
Untie the knots in you
the most stubborn melancholy .. maybe

And that;s the case for Saad Hasta La Vista Baby Hariri, his mafia and his Christian Sunnis. I bid you all ADIEU