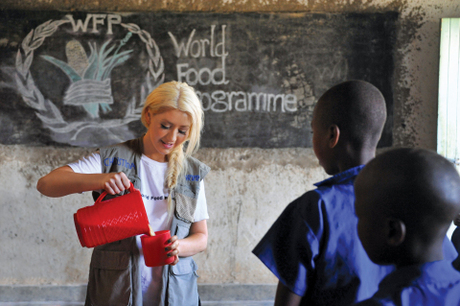 Christina Aguilera says that although she went to Rwanda to help others, she ended up helping herself.

The 32-year-old singer visited Rwanda in June for a hunger relief effort. She said the experience helped her ground herself.

Aguilera has been a spokesperson for Yum! Brands' World Hunger Relief effort since 2009, and has also traveled to Haiti and Guatemala. She said being a mother — she has a 5-year-old son Max — made her feel more empathetic for those suffering from hunger around the world.

"It's so sad to think there's nothing that sets any of us apart," she said. "And when you go into the field, you really see that and feel that we're all one in the same, it's just we're born under different circumstances, and it's sad and I don't understand why, but I feel what I feel and I did what I can."

On her Rwanda trip, "The Voice" mentor served food to children and visited refugee camps, which she called "one of the most difficult moments."

"They had to escape everything and everybody they knew and loved, and it's just a lot to really open yourself up and feel all that," she said, on the brink of tears. "And you just want to help out in whatever way that you can, and obviously I get emotional about it when talking about it, but I think it's important to feel those things."

Yum! Brands Inc. is the parent company to KFC, Pizza Hut and Taco Bell. The company said its World Hunger Relief effort has raised nearly $150 million for the United Nations World Food Programme and other organizations since its launch in 2007.

Aguilera's PSA, which debuts Thursday, features her song "Light up the Sky."

She will return for the fifth season of NBC's "The Voice" on Sept. 23.