Geagea Meets Bedewi: If Other Camp Insists on Voting, Then We’ll Agree with that as We’re the Majority 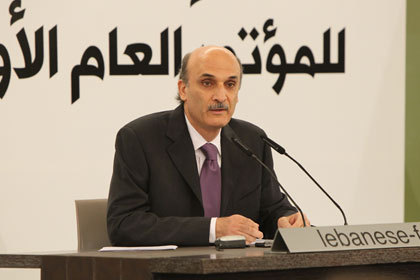 Lebanese Forces leader Samir Geagea stated on Wednesday that if the other camp wanted “to threaten us with withdrawing from Cabinet if we maintained our position over the Special Tribunal for Lebanon, then it may do so without resorting to bargaining over the matter.”

He said after holding talks with Egyptian Ambassador to Lebanon Ahmed al-Bedewi: “President Michel Suleiman prefers not to resort to a vote during today’s Cabinet session.”

Furthermore, he added that he is not worried should the other camp insist on holding a vote, saying: “Most of the votes will fall in our favor because we are the majority.”

“The March 14 forces’ position will remain unchanged seeing as there’s no such thing as a false witnesses file,” Geagea said.

“If the other team maintains its positions, then it will end up as the loser,” he stressed.