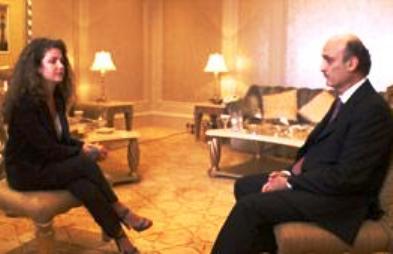 Lebanese Forces leader Samir Geagea slammed the new government on Wednesday, saying that it has reached an “unacceptable” point because of its handling of the indictment in the Special Tribunal for Lebanon.

He told CNN Arabic that Syria and Hizbullah have an interest in fueling tensions in the region “because that will change the course of developments in Syria and Lebanon.”

On the STL, he said: “The opposition will employ all its power to topple the government.”

He did not rule out the possibility of resorting to street action to achieve this goal.

“Should the opposition be forced to take to the street, it would do so within legal limits,” Geagea stressed.

On the developments in Syria, he noted that it is difficult to predict whether its protests will topple the regime of President Bashar Assad, pointing out that no cracks in the regime have yet emerged.

Asked if Hizbullah would maintain its power if the regime is overthrown, he responded: “It will definitely grow weaker than it already is now.”

The LF leader also ruled out the possibility that the party would lay down its arms and change into a political party.

“Sometimes weapons become a burden on those wielding them,” Geagea remarked.

“Ever since the liberation of southern Lebanon in 2000, Hizbullah’s arms have grown to become a burden on it,” he said.

Gea Gea the murdere on CNN? I will write CNN and ask why they host war criminals. .. The only interview they should make with him is from Jail.

im sure he wanted to go on al manar , where all the human trash is given the right to say what they think..

may i remind those alzheimer affected people that AOUN said the exact same things a few years ago...

looks like an nahar is turning a "diary of a worst of the worst war criminals in civil war".

geagea war criminal maybe jabal amel, but he did 11 yrs in prison which lots of other war lords didn t do!

would you be ready to jail all the other warlords who participated in the civil war and gave orders to kill lebanese?
lots of your friends in M8 should also be jailed in that case no?

isn t that asking for justice?

I am cetainly not a fan of this person however he is not more criminal than hassan, berri, walid or aoun and the rest of the trash out there so the same comments in ths thread should also be directed at the other war criminals don't you think?!!!!

He's right, the filthy militia are weak, scared and under pressure and undoubtedly will do something stupid

Geagea today is the strong man in the freedom camp. He has clear vision and loyalty to this country, and he will lead us out of darkness.

no wonder khameniiix and his zelm keep bashing you ya Hakim, it means you are on the right track

1. yes. all of them. but if you didn't know nasrallah is not one of them. look at the history.
2. we should put zionist spies to prison also because they were instigators of civil war in early years. later years they also also busy but this time is sunni shia strife on the agenda. just look at shab

and if you didn't know lady gaga was in prison for crimes that were committed during AND after the civil war. of course we all know that he was in prison for political reasons, but he went back on taef and in that moment that is crime itself.

Lebanese political corruption system to blame, especially war criminals remain in power leading the nation into unstable situation and very risky, blame yourself and other war criminals, Aoun, Hezbollah and others who enjoy political immunity by fighting back reform, change and justice.

jabel amel: i am happy to read your words. you must be the only M8 supporter here to claim that you want ALL of the corrupted and war criminals in prison independently of their political side!

of course all spies should be imprisoned , M8 or M14, and sentenced but on facts and evidence not out of revenge and labeling its adversaries spies because they don t share the same point of view!

thx for your honesty.

of course i do not share the same vision you have on hezbollah because for me they are a militia nothg else now, but my vision is a political one and certainly not a religious one.

and i agree with you that some want to create a sunni shia division but let s hope it will never happen.

sane people should know that this would mean a gigantic catastrophe for lebanon!

when will people forget the past and look to the future.
stop repeating your leaders' words. forget who is speaking and listen to what he says.
the guy did his time...the only politician to do time for crimes committed or pinned on him..(whichever you believe is fine - at least he did his time).

He should have been the crazy one after spending over 10 years in a 3 by 3 cell alone....and not Aoun... While Aoun lived a lavish life, his supporters were beaten and brutalized; killed and put in jails (by the same people he has allied himself with - i might add). No, Syria is out of Lebanon...so why hate the Syrian regime - words from the aoun flip flop dictionary. shame on him and shame again on those simple minded people who like aoun just because he is aoun or even like geagea just because he is geagea...

To everyone who hates Samir Geagea:

Seriously, were the LF only the ones carrying weapons in the civil war? Everyone else was part of Red cross? No one else from the other militias fought, carried arms, and spilled Lebanese blood? Was it Geagea who allied himself with Palestinians, Syrians, Libyans, etc to kill Lebanese? You're going to rant that he allied with Israel? IT WAS WAR. The Christians in Lebanon were being attacked by the Palestinians and their allies. What were they do? Roll over and die? It was a CIVIL WAR. It was dirty and all militia Leaders admitted and agree it was a very dark time for Lebanon.

War is a despicable and horrific thing. Thank God the civil war in Lebanon ended. Have we progressed from what we were fighting of before? Have the Lebanese wisened and become more accepting? I would like to hope so. But unfortunately, from what I've seen in real life and read from a lot of comments here, NO. Not all of the Lebanese have learned.

It saddens me deeply that after all the damage and pain the civil war has brought, a lot of Lebanese still support and hold on to ignorant and close minded ideologies that is biased to a certain sect.

When a Lebanese leader, no mattter what his religion is, stands up for the sovereignty of Lebanon and the unity of all Lebanese. We should all salute and support him/her.

We say we love Lebanon. But the truth is, we only love Lebanon the way we believe it should be. This applies to all sects. Live and let live.

I never knew CNN to be a forum for lame stand-up comic with a criminal past and no future. Actually, he only has the Future for the purpose of inflating him with money and hot air.

Stop following blindly your leaders, whoever they are...maybe that would let us one day come back to our beloved country...

@ Jabbour & expat
I agree. Nevertheless, Geagea is one of the very few who always had a clear agenda and political vision, and has always fllowed it.
We cannot say the same about Joumblat, Aoun, Hariri, Murr, and many more...