Kosovo, Macedonia Back Off from Trade Row 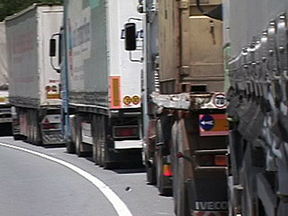 Kosovo on Saturday lifted a ban on imports from neighboring Macedonia, further defusing a trade row between the Balkan countries.

"The decision (on the ban) of the import from Macedonia will be repealed from this midnight," (2200 GMT), the trade ministry said in a statement.

The ministry said it expected Macedonia to in turn annul a tax that had been slapped on vehicles and people entering the country from Kosovo.

Earlier, Macedonia had called off its ban on Kosovar wheat and flour.

The trade dispute between the neighbors flared in July, when Skopje limited the import of wheat and flour from Kosovo, prompting Pristina to respond by banning imports from Macedonia of fruits and vegetables, alcohol and cigarettes.

The dispute escalated last week with Macedonia introducing a tax on all vehicles and passengers entering its territory from Kosovo -- 10 euros ($13) for a truck, five euros for a car and two euros per passenger.

The move prompted Pristina on Monday to launch a total ban on all imports from its southern neighbor.

Most of Kosovo's imports travel through Macedonia.