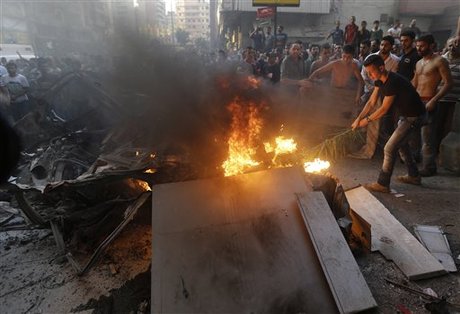 The deadly car explosion killed at least 22 people and wounded 325 others in Beirut's Rweiss neighborhood.

"The details behind the bombing were revealed once the path the booby-trapped car had passed through was discovered,” al-Manar said during its evening newscast, noting that the operation “was extended over three stages.”

It explained: “In the first stage, a BMW car was purchased by Nada al-Salman, who is from Alieh but a resident of (the Beirut neighborhood of) Msaitbeh. Then, a man who hails from (the Bekaa town of) Arsal bought it.”

"The car got later in the hands of Omar al-Atrash, also from Arsal.”

"But investigation revealed that she has nothing to do with the blast,” al-Manar remarked.

The same source continued: “In the second stage, Syrian nationals booby-trapped the car, changed its color from black to silver, and replaced its number plate in a garage in Arsal.”

"These transformations were done under the supervision of al-Atrash.”

In the last stage, three days before the blast, witnesses saw Mohammed Jassem al-Karaouni driving the car in the Bekaa town and the following day, it was seen the Beirut neighborhood of Cola, according to al-Manar.

"The car entered the Rweiss region minutes before the explosion. The driver parked it and left.”

Al-Manar added that Military Tribunal Judge Imad al-Zein will be investigating this case, noting however, that the General Prosecution did not give him the suspects' names “despite identifying them.”

Judicial sources told the Hizbullah TV channel that details surrounding the explosive used in the bombing “should be revealed soon.”

"What was revealed so far is great and should be followed-up with the arrest of the suspects,” the sources said, according to al-Manar.

Hizbullah leader Sayyed Hassan Nasrallah had said on Monday investigation into the attack showed Sunni extremists affiliated with the Syrian opposition were behind it.

"We have reached conclusive results, as promised," he said.

"It is a takfiri group working within the framework of the Syrian opposition and located on Syrian soil," he added, saying both Lebanese and Syrian nationals were involved in the attack.

"I think that official security forces have reached the same conclusion," said Nasrallah.

Hang him. We can have a double hanging. Him for Rweiss. And Assad for Tripoli.

banikharoof: contrarily to what M14 does, HA didnt accuse anyone for now 40 days.

and about omar atrash, say your goodbyes.

source? elmanar... we know how much credit must be given to them!

lol i had thé same thought.

Al manar is better than The FBI

Chain el atrash and badredine the killer of hariri together and hang them together with the same rope.
That would be good for el 3aych el mouchtarak.

They are so bright to lift themselves up to detective status in a matter of days. However when the best forensic evidence the world has to offer, has been painstakingly assembled against them (The STL) they turn it down, merely raising their eyebrows!

this info should be revealed by the government and after the suspects have been apprehended.. donno why a TV station can air something that is still an ongoing investigation

yea they should take example on the great role-models of this world, like STL and der spiegel... errrr no wait

he has two way out of arsal: syria, or towards lebanon. they're only letting him chose where he'd like to die.