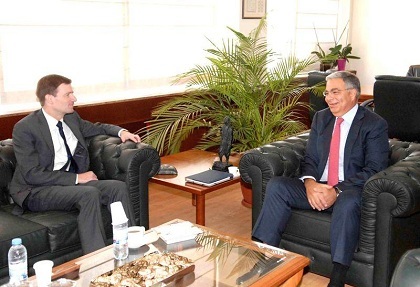 U.S. Ambassador to Lebanon David Hale highlighted on Wednesday the additional U.S. assistance to Lebanon for both the humanitarian and security challenges that Lebanon faces that was announced by President Barack Obama on Tuesday.

He said after holding talks with caretaker Information Minister Walid al-Daouq: “This aid helps the Lebanese army fulfill its mandate as Lebanon’s sole legitimate defense force and implement outstanding U.N. Security Council resolutions, such as 1701 and 1559.”

“This aid comprises an additional $74 million to help Lebanon cope with the Syrian refugees and help Lebanese host communities,” he added.

“The aid will enhance the delivery of vital services, provide educational and vocational training, and support health projects,” explained the ambassador.

The total U.S. contribution for Lebanon to date is now over $254 million in support of refugees from the Syrian conflict and Lebanese host communities.

“We are also strong partners with the Lebanese state institutions that are responsible for security and accountable to all Lebanese people,” stressed Hale.

Obama also announced on Tuesday an additional $8.7 million of support for the Lebanese army for internal stability and border security missions.

This brings the total security assistance to over a billion dollars in recent years, continued the U.S. ambassador.

Addressing the meeting on Tuesday between Obama and President Michel Suleiman, Hale said: “It was an excellent meeting and gave Obama an opportunity to express his appreciation for Suleiman’s extraordinary leadership at a very challenging time both here in Lebanon and the region.”

“We know that the conflict in Syria is affecting every aspect of life in Lebanon, and therefore we commend Lebanon’s policy of disassociation from the Syrian conflict,” he noted.

“Unfortunately, Hizbullah is deeply involved in a conflict that has displaced millions of people and threatens to destabilize the region,” he lamented.

“This meeting, chaired by U.N. Secretary General Ban Ki-moon, and attended by key foreign ministers and other leaders is a show of solidarity with the Lebanese state and people,” stated the ambassador.

“The American and Lebanese people enjoy a longstanding friendship and partnership at many levels. We want to deepen these ties to benefit both of us, and to continue to help the Lebanese build state institutions that are answerable to all Lebanese,” he concluded.

Obama met with Suleiman on Tuesday on the sidelines of the U.N. General Assembly in New York.

According to state-run National News Agency, Suleiman told Obama that “the international community and the United States must offer support in order to secure the success of the meeting of the international support group for Lebanon and to help the country cope with the burden of the Syrian refugee influx."

On Wednesday, Suleiman along with Ban will head a meeting of an international support group for Lebanon, which is burdened by the flow of refugees from Syria.

The meeting, which will include the five permanent members of the U.N. Security Council, will examine ways to help Lebanon maintain political stability and security, and confront the continuous flow of Syrian refugees.

The U.N. refugee agency UNHCR has registered more than 746,000 Syrians in Lebanon, though many others remain unregistered.

The Lebanese government puts the number of Syrians in the country at 1.3 million, though that figure includes Syrians who were already in the country when the conflict began 30 months ago.