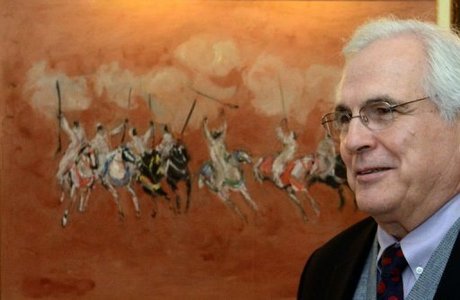 Algeria said Monday it supports "intensified efforts" by the U.N. envoy to Western Sahara, as he began a new tour of the region, while underlining the Sahrawi people's right to self-determination.

Christopher Ross flew to Rabat at the weekend on the first leg of his latest mission to break the deadlock over the disputed territory.

"Algeria is firmly and categorically committed to the right (of the people of Western Sahara) to self-determination and for this reason supports the intensified efforts by the personal envoy of the U.N. secretary general," foreign ministry spokesman Amar Belani told Agence France Presse.

Ross's mission should "help the two parties to the conflict, namely Morocco and the Polisario Front, to find a solution that allows Western Saharans to freely determine their future within the framework of a referendum that is fair, transparent and unhindered," he added.

Announcing Ross's trip on Thursday, a U.N. spokeswoman in New York said he would also hold bilateral consultations with neighboring states Algeria and Mauritania, and would report back to the Security Council on October 30.

Morocco occupied Western Sahara in 1975 after Spain's withdrawal, in a move not recognized internationally, and has proposed broad autonomy under Moroccan sovereignty for the phosphate-rich region.

But this is rejected by the Algeria-backed Polisario Front rebels, who took up arms to fight for an independent state until the United Nations negotiated a ceasefire in 1991, and who insist on the Sahrawis' right to a U.N.-monitored referendum on self-determination.

Ross's efforts to bring the two sides together for direct talks have faltered amid some acrimony, with the Moroccan government briefly demanding last year that U.N. leader Ban Ki-moon replace the envoy.

Earlier this year, Morocco lobbied furiously to prevent the U.N. mission in Western Sahara being tasked with human rights monitoring, as proposed by Washington, when the mission's mandate came up for renewal at the Security Council.