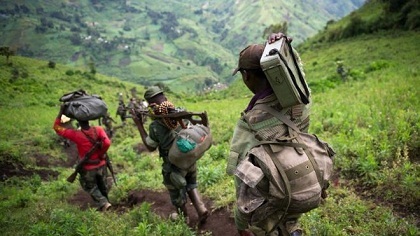 Rebels in the Democratic Republic of Congo (DRC) said Saturday they are heading toward "major breakthroughs" with the Kinshasa government in peace talks in Uganda, possibly within hours.

Under Uganda's mediation, "major breakthroughs are about to be obtained in Kampala since the heavy involvement of the international community in the dialogue" between the two sides, the M23 movement said in a statement.

It referred to the "remarkable presence" of U.S. special envoy to the Great Lakes Russ Feingold and the U.N. special envoy Mary Robinson as well as Martin Kobler, the head of the U.N. mission to the DRC, and representatives of the European Union and African Union.

During talks on Friday, "the M23 made major concessions on its political demands in order to make possible the signing of the peace agreement in Kampala in the coming hours," the group said.

"By this act, our movement wishes to demonstrate its determination to contribute to the rapid establishment of a lasting peace in the Democratic Republic of Congo," it said.

No DRC government negotiator was immediately available for comment on the statement.

The M23 controls an area of around 700 square kilometers (270 square miles) in the east of the DRC, bordering Rwanda and Uganda.

The M23 was founded by former Tutsi rebels who were incorporated into the Congolese army under a 2009 peace deal.

Complaining the deal was never fully implemented, they mutinied in April 2012, turning their guns on their former comrades and launching the latest rebellion to ravage DR Congo's mineral-rich and conflict-prone east.

The United Nations regularly accuses Rwanda and Uganda of supporting the M23, something both countries deny.

The negotiations in Kampala had reportedly stumbled over the question of an amnesty for the rebels and their reintegration in the army. Backed by the international community, the government in Kinshasa has said there will be no impunity for the main rebel leaders.