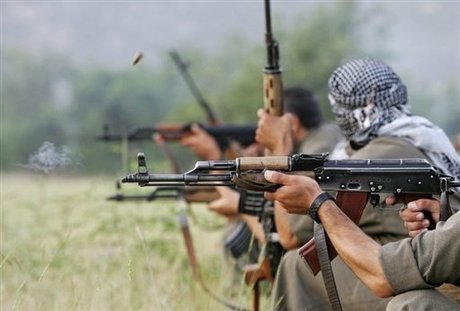 Fierce clashes raged Saturday after Syrian Kurds seized from jihadists a crossing on the Iraqi border, a key supply route for weapons and fighters in the 31-month war, activists said.

Fighters from both sides were killed in the border clashes, which came a day after Syria's regime and its opponents traded blame for a car bomb attack on a mosque that left dozens dead.

The Kurds "took control of the Al-Yaarubia border crossing with Iraq at dawn after clashes with the Islamic State in Iraq and the Levant, the Al-Nusra Front and other rebels," the Syrian Observatory for Human Rights said, citing activists.

The Kurds have been struggling to carve out an autonomous northeastern region similar to one in northern Iraq, further complicating the Syrian war.

Rebels battling to oust President Bashar Assad have increasingly turned their guns on each other in the past few months, with jihadists fighting the mainstream Free Syrian Army in the north, where the insurgents control vast swathes of territory.

The seizure of the border post would be another blow for the Islamists. State television said late Friday that Al-Nusra leader Abu Mohammed al-Jawlani had been killed, but the Al-Qaeda-linked group said he was in good health.

The conflict flared when Assad's opponents took up arms in response to his regime's brutal crackdown on Arab Spring-inspired protests that erupted in March 2011.

More than 115,000 people are estimated to have been killed, millions uprooted from their homes and tens of thousands trapped by the relentless fighting.

Saturday's violence comes a day after a car bomb outside a mosque in Suq Wadi Barada, a town near Damascus, killed at least 40 people and wounded dozens more, according to the Observatory.

State news agency SANA said "the car exploded while the terrorists were packing it with explosives," using the regime term for rebels.

The opposition National Coalition blamed the regime for the "massacre" caused by what it said were two car bombs placed outside the Osama Bin Zeid mosque.

Elsewhere an army ambush killed about 24 rebels on the outskirts of Damascus, said the Observatory. SANA put the toll at 40.

The army has closed in on Eastern Ghouta, a ring of rebel-held suburbs it has besieged for months and which was targeted in an August chemical attack that killed hundreds of people and almost led to punitive U.S. strikes.

UN and U.S. officials have expressed concern about Eastern Ghouta and other besieged Damascus suburbs, following reports of severe food shortages and rising malnutrition there.

The Observatory described a similarly dire situation in the central city of Homs, where it said some 3,000 civilians were trapped in an area sealed off by regime forces for more than a year.

"Three thousands civilians, among them 500 aged over 70, are living exclusively off the little food that had been stored in the besieged districts of Homs," said Observatory director Rami Abdel Rahman.

Further north, in the Sfeirah district near Aleppo, some 130,000 Syrians have fled non-stop heavy bombing in a "massive exodus" this month, said Doctors Without Borders.

A U.N.-commissioned report said more than half of Syria's population is living in poverty and warned that the economic devastation could last for years.

UN agencies said they were racing to vaccinate children against a host of diseases amid fears of a polio outbreak, which would be the country's first since 1999.

The mushrooming humanitarian crisis, and the initial success in implementing a U.S.-Russian accord to dismantle Syria's chemical arsenal, have spurred renewed efforts to convene peace talks.

But despite pressure from its Western and Arab backers, the fractured Syrian opposition has yet to decide whether to attend the so-called Geneva 2 conference proposed for next month.

The opposition has insisted that Assad step down as part of any political settlement, which Damascus says is off the table.