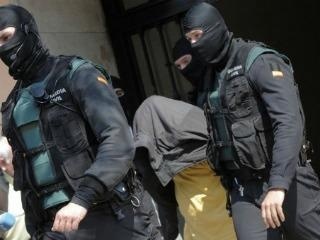 A court in Madrid on Wednesday convicted six Somalis for piracy and sentenced them to between eight and 12 and a half years in jail for attacking a Spanish warship in 2012 off the coast of Somalia.

Spain's National Court, the country's top criminal court, convicted five men of piracy and arms possession and sentenced them to eight years each.

A sixth man, convicted of the same crimes as well as membership of an armed group, received a jail term of 12 and a half years.

The six, aged 24 to 35, were arrested in January 2012 following a shootout when they tried to board the Patino, a Spanish navy supply ship that was taking part in the European Union's Atalante operation against piracy in the seas off largely lawless Somalia.

During their trial all six men denied being pirates, claiming they were fishermen who had approached the ship for help.

Spain's interior ministry said the six men, who were armed with AK-47 rifles and grenades, were seized after having attempted an attack "by boarding the ship as pirates".

The group shot at the Spanish sailors, triggering retaliatory fire, and then fled, according to the ministry.

A helicopter followed the suspects and the six men finally surrendered and were taken to Spain to stand trial.

In 2011, two Somalis were sentenced in Spain to 439 years in jail each for seizing a Spanish tuna-fishing boat in 2009 and holding its 36 crew members for 47 days.

Under Spanish law, they will serve only a maximum of 30 years in jail, regardless of the sentence.

Maritime piracy by Somalians in the Horn of Africa hit its peak in 2011, but has since waned significantly in the face of stepped-up international naval patrols.