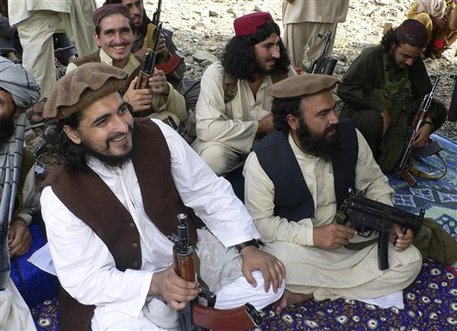 The Afghan president has criticized the timing of a U.S. drone strike that killed the Pakistani Taliban leader, after an angry Islamabad expressed fears the death would undermine planned peace talks.

The killing Friday of Hakimullah Mehsud, the feared chief of the Tehreek-e-Taliban Pakistan (TTP) which has killed thousands in a six-year insurgency, sparked a furious response from the Pakistan government.

Islamabad was taking the first steps towards initiating talks with the militants when Mehsud was killed, prompting Interior Minister Chaudhry Nisar to accuse Washington of "scuttling" peace efforts.

Afghan President Hamid Karzai added his voice to the criticism, telling a U.S. Congress delegation visiting Kabul that the drone strike "took place at an unsuitable time", his office said in a statement released late Sunday.

The statement said Karzai hoped the peace process, still at an embryonic stage, did not suffer as a result.

The TTP operate separately from the Afghan Taliban but notionally pledge allegiance to the same leader, Mullah Omar.

Karzai has been seeking to open peace talks with the Afghan Taliban to end 12 years of war, but the Islamist militants have refused to negotiate with his appointees, dismissing him as a puppet of Washington.

Pakistan was a key backer of the hardline 1996-2001 Taliban regime in Kabul and is believed to shelter some of the movement's top leaders.

Sharif came to power in May partly on a pledge to hold talks to try to end the TTP's bloody insurgency that has fueled instability in the nuclear-armed nation.

He is to hold a meeting of his cabinet security committee on Monday evening after a furious Nisar said "every aspect" of Islamabad's ties with Washington would be reviewed.

Relations had appeared to be warming after lurching from crisis to crisis in 2011 and 2012.

The party has said it will block NATO convoys in the northwestern province of Khyber Pakhtunkhwa where it is in power, which would cut off one of the main crossing points into Afghanistan.

With NATO withdrawing 87,000 troops from Afghanistan by the end of next year after 12 years of war, the ground supply lines through Pakistan are of vital importance.

Anti-American sentiment runs deep in Pakistan and drone strikes are hugely unpopular, with many criticizing them both for civilian deaths and as a violation of sovereignty.

But after the heated rhetoric of the weekend, Sharif and his government must weigh the practicalities of their response carefully in the light of improving relations with a vital financial partner.

Last month U.S. President Barack Obama welcomed Sharif to the White House and the State Department announced the release of $1.6 billion in aid, including $1.38 billion for the country's powerful military.

The money had been frozen as relations plummeted amid a series of crises in 2011 and 2012 including the U.S. raid to kill Osama bin Laden at his hideout in Pakistan -- carried out without Pakistani knowledge.

Washington has said the issue of whether to negotiate with the TTP was an internal matter for Pakistan but stressed the U.S. and Pakistan had "a vital, shared strategic interest in ending extremist violence".

The TTP announced on Sunday that Asmatullah Shaheen Bhittani, the head of the militants' supreme council, had been appointed temporary leader while a permanent replacement for Mehsud is chosen.

Bhittani, who was seen as close to Mehsud, has been touted as a potential permanent replacement, as has the movement's number two Khan Said, alias Sajna.

Mr. Karzai if I were making the decisions, I would let you deal with and handle the Taliban yourself.