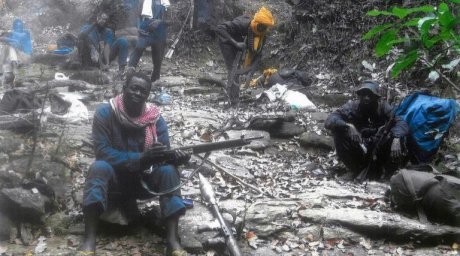 "The village of Vacap and parts of the village of Yongoro went up in flames," an officer of the African-led stabilization force MISCA told Agence France Presse on condition of anonymity. "Villagers' property was destroyed by fire. They all fled to the scrubland."

He could not say whether there were any casualties or wounded, after returning from the area. Both villages are located in the west of the impoverished country.

The landlocked nation has been mired in chaos since the Seleka coalition of rebels ousted longtime president Francois Bozize in March.

A new government was put in place and Seleka was disbanded in name but continues to operate as a proto-militia in the region.

The country has seen an increase in clashes between the former rebel coalition that led the coup, who are Muslim, and local self-defense groups formed by rural residents who are Christian, in common with around 80 percent of the population.

"They started shooting into the air, smashed entrance doors, pillaged our property before setting fire to the houses," he said.

Colonel Adam Nassir, an officer with the Central African security forces, said the assailants were looking for a "marabout", a Muslim religious leader, whom they accuse of backing the local self-defense group.

Colonel Nassir said the attackers had "received reliable information that the marabout who would vaccinate the (members of the self-defense group) to make them invincible" lived in the area.