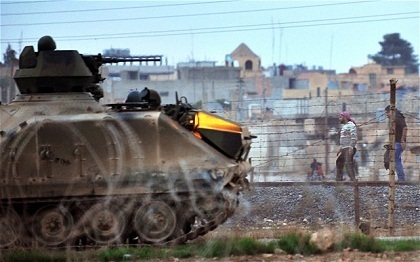 Turkish riot police fired tear gas and water cannon at thousands of demonstrators who were protesting Thursday over the building of a controversial wall on the border with Syria, witnesses said.

Police took action to disperse a large crowd of people who threw Molotov cocktails and plastic bottles at officers in the border town of Nusaybin in the Kurdish-majority southeast, they said.

Construction of what has been dubbed a "wall of shame" between Nusaybin and the northern Syrian town of Qamishli has inflamed local tensions.

The demonstration was staged the same day as the town's Kurdish mayor ended a nine-day hunger strike in a show of protest against the development.

Ayse Gokkan "stopped the hunger strike today (Thursday). We think the protest has reached its goal," an official from her Peace and Democracy Party (BDP) told AFP on condition of anonymity.

Gokkan's office did not immediately reply to AFP's request for confirmation her action had ended.

The mayor, who had been staging her hunger strike in a border minefield since October 30, has described the barrier as a "wall of shame" that would divide Kurdish people.

Turkey's government, which is wary of ethnic Kurds on its territory joining up with Kurds in northern Syria and Iraq in a bid to create a de facto state, has denied it was building a "fully-fledged wall".

Local officials told AFP this week that an iron structure had already gone up and was now being filled with concrete.

Turkey has become of the fiercest opponents of the Syrian regime since President Bashar Assad's deadly crackdown on a popular revolt in March 2011.

In addition to taking in more than 600,000 refugees who have fled the civil war in Syria, Turkey has become a rear base for rebels fighting to topple Assad.