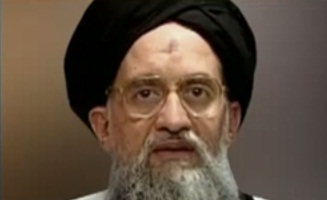 Al-Qaida chief Ayman al-Zawahiri has ordered the disbanding of the main jihadist faction in Syria, the Islamic State of Iraq and the Levant, in an audio message aired on Al-Jazeera Friday.

The tape confirmed a letter put out by Al-Jazeera in June, claimed to have been written by Zawahiri and addressed to the leaders of Al-Qaida factions in both countries.

The head of Al-Qaida also stressed that the Al-Nusra Front was the branch of the global jihadist group in Syria.

Zawahiri said the leader of Al-Qaida in Iraq, Abu Bakr al-Baghdadi, "has made a mistake by establishing the Islamic state of Iraq and the Levant without asking for our permission, or even informing us."

It was not immediately clear when he made the remarks.

Meanwhile, Zawahiri added that the leader of the Al-Nusra Front in Syria, Abu Mohammad al-Jawlani, "has made a mistake by announcing his rejection of the ISIL, without taking our permission, or even informing us."

He said the rule of ISI will be confined to Iraq, while the Al-Nusra Front in Syria will be "an independent branch of Al-Qaida that reports to the general command."

Zawahiri also ordered the two branches to support each other whenever needed and possible.

An Al-Jazeera spokesman said the "recording has just emerged, and it confirms the authenticity of the letter" broadcast by Al-Jazeera previously.

Opposition activists have blamed the ISIL for an escalating abuse against Syrian rebels and civilians, including kidnappings and public executions in areas under the control of the extremist group.

Zawahiri chided Islamists from both sides for unauthorized attacks on Muslims.

"Both sides, and all the mujahedeen (Islamist fighters) should observe the sanctity of Muslims, in respecting their blood, families and property, and should not attack a Muslim without a court order," he said.

Meanwhile HA and Co. are fighting in Syria and Lebanon to liberate Jerusalem.

same as hezbollah who are the "islamic" resistance LOL

"LOL - my two neurons managed to link two completely different things on basis that they both use the same word! i'm so smart! einstein was a human, i am a human, therefore i am einstein!!! LOL" signed peace

how stupid you are mowaten in your idiotic attempt to deny that hezbollah is an ISLAMIC party ! LOL!!!!

hahaha sorry peace, you have my full apologies; i said two neurons when i should have said one.

must have been an erroneous report because from the get go their leaders said they were affiliated with zawahiri.

Make it a sword tanerte7

Now al baghdadi will revolt against zawahiri , and the cocktail will grow 1 ingredient.

if u were following the syrian conflict, u would know that bashar doesn't attack or bomb zones where alqaeda is...

Yes! A great day for democracy and a blow to the FSA-Al Qaeda terrorists, their February 14 brethren, and their Saudi Arabian terrorist sponsors.

bashar got only what he deserved... after having harboured and protected for many years fanatic islamic groups to use them abroad for his interests now he is facing them ! ironic twist of fate!
we never heard M8ers complain before of this fact! now? mama mia!

and also why would assad free jihadist from his jails if he considers them terrorists conspiring against him LOL!
of course this does not suit M8s propaganda....

Bashar used these islamist terrorists since the second Iraq war, he sent them packed with suicide vests. it's no secret... of course they are working 4 him.

Yalla ya shaab el Middle East. Religion will feed you and save you. Follow these demons, and you will see peace. (But bravo to the brave people of Egypt. You have my respect.) These same demonic figures remained silent and facilitated the demise of the Palestinian lands and still refuse to find a solution and/or lift a finger against the alleged enemy. Al-Qaeda, Al Nusra, Muslim Bros. all the same. When push comes to shove, the same is true regarding the other side. Stop playing politics and games with religion, wake very early in the morning, take a shower, have some coffee/tea, look yourselves in the mirror and find another way to better your livelihoods.

where's everybody this evening???