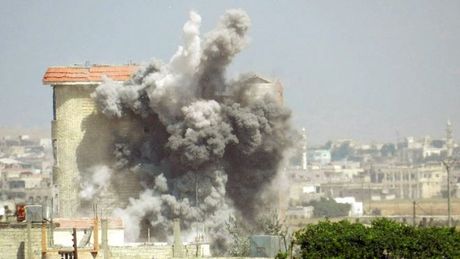 A hardline Palestinian militant group allied to President Bashar Assad's government said five of its members were among those wounded in Mazraa.

Elsewhere in the capital, mortar fire wounded six people near a Red Crescent hospital and a market, SANA reported.

The new casualties came a day after rebel mortar fire killed nine children and wounded more than 20 other people in two districts of the capital.

The rounds hit a school and a school vehicle in two majority-Christian neighborhoods, state media said.

Government-held districts of central Damascus have come under repeated bombardment in recent months from rebel positions in the outskirts of the capital that repeated assaults by the army have failed to eliminate.

no, all this is lies. it's assad who hired islamists to fire those mortars on damascus so he can justify fighting against the islamists elsewhere that he also hired so that he could justify fighting the FSA, which he also invented in order to tarnish the image of the peaceful protesters.
in reality there was only a few hundred protesters who were really against assad, he invented all the others to justify the repression. dont let anyone tell you otherwise

If you believe Hezbollah or Sunni terrorists (both are islamists by the way!!!) know who or what they fight for, you couldn't be more wrong.

Those people are manipulated into fighting for reasons beyond their knowledge. They believe they fight for a certain cause when the agenda is totally different.

And yes, Assad does control both Shiite and Sunni extremist entities to his will ... he only needs to control their leaders who are corrupted as hell. The little guys are clueless "victims" of brainwashing, drug abuse and poverty !

yes it's true, everybody is clueless except you flamecatcher. please enlighten us, why is assad manipulating the entire world's islamists to come fight each other in syria?