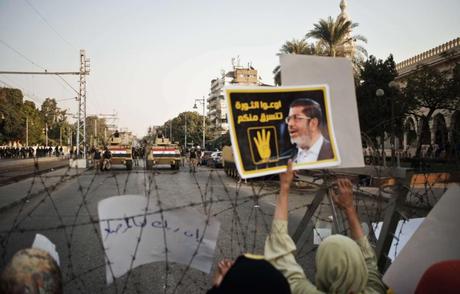 An Egyptian court ordered an end to a state of emergency Tuesday, two days ahead of schedule and three months after it was imposed during a crackdown on Islamist protesters.

The cabinet said in a statement it would respect the ruling but would wait for official notification from the court before implementing it.

The state of emergency, accompanied by a night time curfew, had been scheduled to expire on Thursday.

Hundreds of people, mainly Morsi supporters, were killed in the crackdown, while Islamists elsewhere in the country retaliated by attacking security forces and Coptic Christian churches and homes.

The administrative court said in its ruling, which had dismissed an appeal against the state of emergency, that it ended on Tuesday according to its calculation, the official MENA news agency reported.

Both the interior ministry and the military said they would implement the curfew until they received official notification.

"The armed forces have not been officially notified of any court rulings, and are committed to implementing the curfew within designated hours," it said in a statement.

Before Monday's court ruling the curfew was being imposed between 2300 GMT and 0300 GMT.

The military said it will continue enforcing it until it receives the court decision or until the state of emergency ends officially ends on Thursday, said the statement posted on its spokesman's Facebook page.

According to an interim constitution decreed by Mansour, extending the state of emergency any longer would have required a referendum.

The state of emergency granted broad powers of arrest to soldiers deployed on the streets, especially during curfew hours.

"In practice, the state of emergency was only being used for the curfew and arrest powers for the military," said Heba Morayef, head of Human Rights Watch in Egypt.

"It was the symbolism. The interior ministry seems to have this belief that repressive laws are a deterrent."

Egypt has been under almost continuous emergency law since 1967, with breaks in 1981 and after president Hosni Mubarak's overthrow in early 2011.

The scope of the emergency law was gradually whittled down under Mubarak and by courts following the strongman's ouster.

More than 2,000 Islamists, including most of the top leadership of Morsi's Muslim Brotherhood, have been arrested since the overthrow of the president, who has also been jailed.

But the majority of those arrested since Morsi's overthrow were not rounded up according to the emergency law's provisions, Morayef said.

The state of emergency had meanwhile allowed authorities to place Mubarak under house arrest in a hospital after the maximum period of detention expired in September.

On trial for alleged involvement in the deaths of protesters during the 2011 uprising, Mubarak may be forced to go back to jail with the end of the state of emergency, now that the government has amended the law to allow for a longer detention period during trial.

The interim president is meanwhile on the verge of decreeing an amended law regulating protests that has sparked a backlash, even from other members of government and its supporters.