Rockets from Syria Land in Bekaa Amid Helicopter Raid 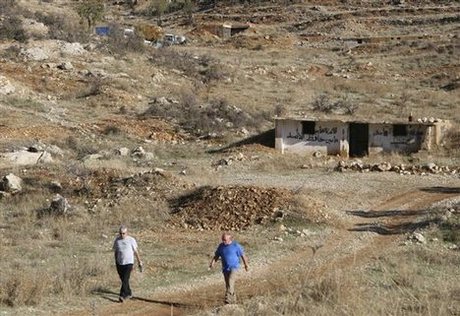 At least six rockets launched from the Syrian side of the border landed on Thursday on the outskirts of the town of Sarin in the eastern Bekaa Valley as President Michel Suleiman urged the army to retaliate against border assaults, the state-run National News Agency reported.

NNA said the attack did not cause any casualties after the rockets hit uninhabited areas.

But Voice of Lebanon radio (100.5) said several houses were damaged in the nearby town of Nabi Sheet where three rockets landed.

After the attack, Syrian warplanes raided the northeastern town of Arsal, NNA said.

They launched four rockets on the town's al-Smaili neighborhood, it added.

The planes carried out a second raid in Kherbet Younin in Arsal's outskirts, NNA said.

Arsal, which lies 12 kilometers from the border with Syria, has been used as a conduit for weapons and rebels to enter Syria, while also serving as a refuge for people fleeing the conflict.

Suleiman later held talks with Army Commander General Jean Qahwaji to discuss the raids, demanding that the army retaliate to them.

He stressed “the need to take the necessary measures to protect the people and Lebanese towns against assaults.”

There's no resistance, we are the poeple Resisting their terror and they are only resisting arrest for their numerous assassinations and mass murders.

Résistance pacifique. I know it's hard for you to understand :-)

Meanwhile, back in Dahiyeh Nasrallah is talking about liberating palestine:)))

Any chance of a complaint to the UN Security Council on cross border firing?

Hala Mukhtar:) Do something about it. You have great connections with sayid and you are his neighbor now. Habibi mukhtar:)

do not worry you have no hearts to be eaten;)

Do not worry you do not have any heart to be eaten;)You are just some bunch of robots moved by your Iranian masters.

Hey Sanni lunatics, the falling "ASSad" regime seems like it will end its fall by falling on you here in Lebanon! But hey, we know your warriorship based on your history of dabke-dancing and enbita7et under the soles of the occupiers, the only and best way you know to defeat the enemy! So please get back to your dabke lessons and push-up practice. Aren't you lucky to have Dr. Arreet 7akeh and his Drs. Arteena Satleh once again on your side? al nasrou atin (kama ata min qabl). takfir

"After the attack, Syrian warplanes raided the northeastern town of Arsal, NNA said.
They launched four rockets on the town's al-Smaili neighborhood, it added."

great! a foreign army bombs our territory with warplanes with the benediction of M8.... if it was israel there would have already been a war , but here? they say welcome!
double standards as usual....

"He stressed “the need to take the necessary measures to protect the people and Lebanese towns against assaults.”"

strange that the army never retaliates when akkar is bombed... i guess the population there don't need to be protected ....

This is a prime example of Iran's interests in the region and plan for Lebanon. Are we sure it wasn't Israel?