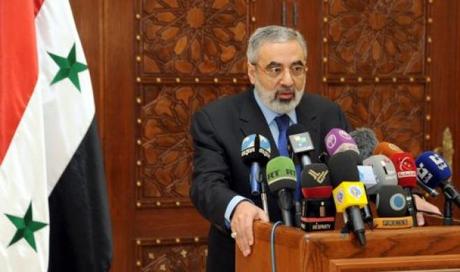 Syrian Information Minister Omran al-Zohbi said Thursday the opposition was dreaming if it believed President Bashar Assad would agree to quit in order to get it to join proposed peace talks.

He said the basis for the peace conference in Geneva the United Nations is trying to organize with Russian and U.S. support was the final statement of a meeting in the Swiss city last year that made no explicit demand for Assad to step down.

"Those who dream they're going to Geneva to be given the keys to Damascus are stupid people without any political weight who understand nothing about politics and live in cloud cuckoo land," Zohbi told the official SANA news agency.

"Discussions at the Geneva II conference will take place on the basis of the June 30, 2012 statement. It's a clear statement with a precise framework and conditions," he added.

The Damascus government has repeatedly expressed readiness to attend the proposed peace talks but the main opposition National Coalition only agreed earlier this week to participate and on conditions.

Principal among those was that Assad play no part in the political transition.

Zohbi mocked the delayed response by the Coalition to Western calls to attend the much delayed talks, now not expected to convene before next month at the earliest.

"Those who announced their readiness to attend just a few days ago have done so at the behest of their masters," he said.

A pro-government newspaper reported on Thursday that the talks are now expected to convene on December 12.

It said that a source in the Syrian government declined to confirm the report.

Munzer Aqbiq, an adviser to Coalition leader Ahmed Jarba, told Agence France Presse a date for the talks had still to be finalized.

"The organizers of Geneva II want the conference to be held before the end of the year. Dates have been proposed around mid-December. These are not official dates. They are proposals which must be discussed," Aqbiq said.

More than 120,000 people have been killed in the armed uprising that erupted in Syria after Assad's forces brutally cracked down on protests inspired by the 2011 Arab Spring.

The opposition wants Assad's departure from power to be a condition of any peace talks, while the regime has said the president's role will not be on the table.

LOL, these terrorists are delusional. Terrorists don't have the right to demand anything. Maybe only death, but they'll get it without even asking, compliments of the Syrian Arab Army!