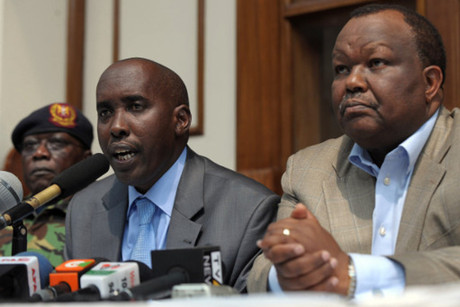 Kenya said Thursday it had stripped 104 people of their citizenship as part of an ongoing security crackdown set in motion by the September attack on the Westgate shopping mall.

The country is currently carrying out a full audit of all national identity documents issued in recent years, cleaning out corruption from its immigration service and tightening up procedures at airports, ports and border posts.

The attack on the Westgate Mall, which was claimed by Somalia's al-Qaida-inspired Shebab rebels, left at least 67 dead and laid bare a string of national security failures.

"I have revoked 104 citizenship documents which we established were fraudulently acquired," Interior Minister Joseph Ole Lenku told reporters, adding that legal action would be taken against the officials who issued the documents.

"Every nation in the world protects the sanctity of its citizenship documents. I have directed officers involved in the issuance of birth certificates, identification cards, passports, and work permits to strictly follow the law. Any officer who fails will be doing so at his or her own peril," he warned.

"The process of cleaning up government departments involved in the issuance of these critical documents has begun and is not about to end. It will continue until the last rotten apple is removed so that we have a clean and secure process," he stated.

"This has significantly enhanced security for our people, and the government will continue investing more in modern technology as security challenges evolve," he added.