Athens to Begin Building First Mosque after Years of Delay 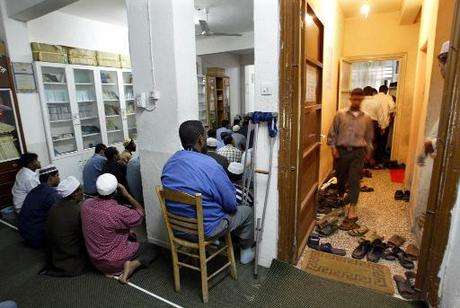 Work is finally set to begin on Athens' first mosque, 13 years after plans were first announced, the Greek government announced on Thursday.

A Greek consortium has been chosen, the infrastructure ministry said, after five previous attempts to find a business group to lead the project failed.

Athens is one of the few European capitals without a mosque.

The building will have a budget of 946,000 euros ($1.3 million) and will be 600 square meters. It is being built on land formerly used by the military but it will not have a minaret.

The project will have to be completed within six months of contracts being signed, said the ministry.

The scheme has been beset by various delays. It was first announced in 2000, ahead of the Olympics in Athens in 2004.

However, it has long been opposed by the powerful Greek Orthodox Church. Some 90 percent of Greeks consider themselves Christian.

Although this is the first official mosque, several non-official places of worship have appeared in the Greek capital, thanks to an increasing number of immigrants from countries such as Pakistan.

In 2011, the Greek government was forced to adopt a law ensuring the construction of the mosque, with the first contract tender to be launched in the summer of 2013.

However, it took five attempts to award a contract because of concerns over where to place the mosque and protests from those on the extreme right, such as supporters of Golden Dawn.

The only official mosques to be found in Greece are situated in the north east region of Thrace, where a minority group of Muslim Turks live.