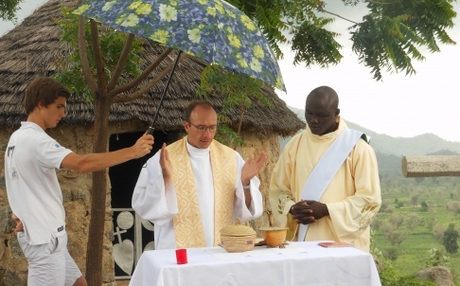 Boko Haram is holding a French priest who was kidnapped in northern Cameroon, a source in the banned Nigerian Islamist group said on Friday, rejecting claims of a rift among the insurgents.

"I can confirm that the French priest is in the hands of mujahideen (fighters) from Jamaat Ahl al-Sunna Li Da'wat al-Jihad, who carried out the operation that was coordinated with Ansaru," he told Agence France Presse.

Boko Haram prefers to go by the Arabic name, which translates as "People Committed to the Propagation of the Prophet's Teachings and Jihad" (holy war).

Ansaru is an offshoot of the militant group and has previously claimed kidnappings of foreign nationals.

The United States on Wednesday listed both Boko Haram and Ansaru as terror groups, bowing to months of pressure to act after years of bloody violence in northeast and central Nigeria that has left thousands dead.

Hours after the declaration, heavily armed men abducted Roman Catholic priest Georges Vandenbeusch from his home near the town of Koza in northern Cameroon, about 30 kilometers (20 miles) from the Nigerian border.

He was seized by about 15 people, who burst into his Nguetchewe parish base, according to the bishop of the Nanterre diocese near Paris, which has authority over the cleric.

The Boko Haram source, who did not want to be identified, declined also to say where the 42-year-old priest was being held, after the Cameroon authorities said they feared he had been taken across the border into Nigeria.

Speaking in Paris after talks with Togo's President Faure Gnassingbe, French President Francois Hollande said Vandenbeusch had "most likely" been taken to Nigeria.

"We are checking all the information that we can get," he told reporters, adding that he would speak with his counterpart in Cameroon, Paul Biya, and vowing that France was doing "all it could to find... and free" the priest.

"The fight against terrorism is still our main concern and common purpose," he added.

Vatican spokesman Federico Lombardi described the kidnapping as "an extremely serious and horrible case, reflected the spread of hatred and violence in the region."

The Boko Haram source promised to reveal more details about the kidnapping "at the appropriate time".

But he added that claims of rifts within the ranks of the insurgent group, which has been linked to al-Qaida's operations in north and western Africa, were exaggerated.

Boko Haram originally claimed to be fighting for the creation of an Islamic state in northern Nigeria and has made suicide bombing and gun attacks its trademark.

Ansaru has been linked to at least three hostage-takings of foreigners since 2011 and has mentioned French intervention in Mali and European nations' "atrocities done to the religion of Allah" when claiming kidnappings.

"There is a deliberate attempt by the enemies of Islam to portray Jamaat Ahl al-Sunna Li Da'wat al-Jihad as sharply divided," the source said.

AFP tried to verify the Boko Haram claim from other sources but there was no immediate information available from the authorities.

The kidnapping of Vandenbeusch, who had been working in the area for two years and had ignored French government warnings about the dangers of staying in the region, brings to eight the total number of French hostages held worldwide.

Four others are being held in Syria, another in Nigeria and two in the Sahel region on the southern fringes of the Sahara desert.

In February, a Frenchman employed by the gas group Suez in Yaounde was kidnapped with his wife, their four children and his brother while visiting a national park near the Nigerian border.

They were then taken across the notoriously porous frontier. The kidnapping was later claimed by Boko Haram, which has been waging a deadly insurgency in northern Nigeria since 2009.

The family was released in April but France denied paying a ransom or launching a military operation to secure their freedom.