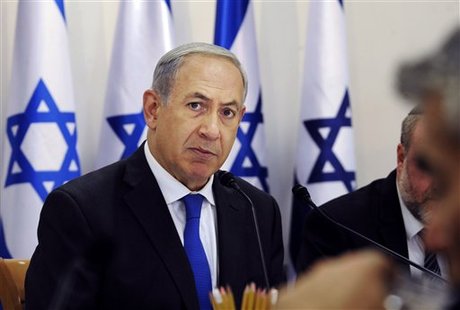 Israeli Prime Minister Benjamin Netanyahu insisted Sunday that the peace process with the Palestinians was not "frozen," but said he was waiting for Palestinian concessions to move the talks forward.

"They're not frozen. We're talking," the Israeli leader said on CNN's "State of the Union" program.

But "it's time to talk about Palestinian concessions, too. Like recognizing the Jewish state," Netanyahu said.

Direct talks resumed in June after a three-year hiatus due primarily to Palestinian refusal to hold negotiations while settlement expansion continued.

Since then, Israel has announced plans to build thousands of new settler homes in the occupied West Bank -- territory the Palestinians want for their future state under any peace deal.

Or maybe this is Peter Sellars.

Since 1948 there has only been one name - The State of Israel, everything else is just name playing by parties interested in playing down the legitimacy of the country.
In that period it hasn't changed its name, as Iran, Iraq, Syria, Egypt, Libya, Yemen and other Arab States have.

Abbas the collaborationist coward needs to make it clear that they will never support a two state solution that is separate and totally unequal because it is APARTHEID. The ONLY other solution is one state Majority democratic rule.