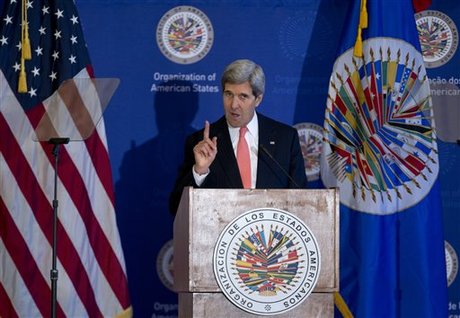 U.S. Secretary of State John Kerry on Monday declared that a nearly 200-year-old policy which had governed Washington's relations with Latin America was finally dead.

Known as the Monroe Doctrine after it was adopted in 1823 by former U.S. president James Monroe, the policy had stated that any efforts by European countries to colonize land in North or South America would be views as aggressive acts and could require U.S. intervention.

"The doctrine that bears (Monroe's) name asserted our authority to step in and oppose the influence of European powers in Latin America," Kerry told an audience at the Organization of American States.

"And throughout our nation's history, successive presidents have reinforced that doctrine and made a similar choice.

"Today, however, we have made a different choice. The era of the Monroe Doctrine is over," he insisted to applause.

"The relationship that we seek and that we have worked hard to foster is not about a United States declaration about how and when it will intervene in the affairs of other American states. It's about all of our countries viewing one another as equals, sharing responsibilities, cooperating on security issues and adhering not to doctrine but to the decisions that we make as partners to advance the values and the interests that we share."

Kerry had been roundly criticized earlier this year when he told U.S. lawmakers that "the western hemisphere is our backyard" in comments that triggered anger from some Latin American leaders.

Bolivian President Evo Morales expelled the U.S. aid agency USAID following the speech, and denounced the United States, which he said "probably thinks that here it can still manipulate politically and economically. That is a thing of the past."

Kerry seemed to agree Monday, saying: "Many years ago the United States dictated a policy that defined the hemisphere for many years after.

"We've moved past that era, and today we must go even further.

"The question is will we work as equal partners in order to achieve our goals?" Kerry asked.

"It will require courage and a willingness to change, but above all, it will require a higher and deeper level of cooperation between us, all of us together as equal partners in this hemisphere."