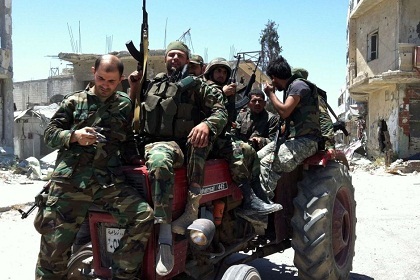 Divisions in rebel ranks and more committed loyalist fighters are helping the Syrian regime notch up military victories that would give it the upper hand at peace talks, analysts and rebels say.

The army's capture this week of the strategic town of Qara, north of Damascus, followed three days of fighting against Al-Nusra Front jihadists.

It comes after a series of government advances in Damascus province and southwest of Aleppo, in northern Syria.

The army's advances are being seen as part of a new strategy devised by Iranian experts sent to back President Bashar Assad's regime, as well as the arrival of new well-trained, highly motivated fighters from Lebanon and Iraq.

A rebel commander, Abdel Jabbar al-Okaidi, who led the assault on Aleppo in July 2012, said "Iran, Hizbullah and the (Iraqi) Abul Fadl al-Abbas militia are coming to fight here with conviction and belief."

While the majority of Syria's rebels -- like the population -- are Sunni Muslim, mainly Shiite Iran and Iraq have sided with Assad, who hails from an Alawite clan, an offshoot of Shiism.

"During any battle there were defections from the regime's side... so it would always end up losing. As for these (Shiite) fighters who have arrived... they obviously don't have any defections, and they are able to resist for longer," said Okaidi, an experienced commander.

According to David Hartwell, a Middle East expert at IHS Jane's, divisions among rebels are also contributing to the shift.

"Disarray among the opposition is a key factor... and it is difficult to escape the infighting that is going on... particularly between (the jihadist) Islamic State of Iraq and the Levant (ISIL) and the Free Syrian Army," Hartwell told AFP.

The mainstream FSA, said Hartwell, has frequently accused ISIL of turning its firepower against the rebels and of failing to back the opposition in its battles against government forces.

The jihadists are also accused of seeking to impose control by terrorizing the population in opposition-held areas, including rebels, into submission.

Just this week, ISIL executed in the northwestern province of Idlib a rebel commander and two members of his brigade, accusing them of corruption and possessing a bottle of arak, a local aniseed-based spirit.

Activists say such practices are common in areas where ISIL is trying to eliminate its adversaries.

In Damascus too, rebels blame disunity as well as the regime's new strategy for their losses.

"The war's tactics are being led and implemented by Hizbullah, the Abul Fadl al-Abbas brigades and other Shiite jihadists," according to Matar Ismail, a rebel spokesman in southern Damascus.

"The main reasons why the regime is advancing... are disunity in rebel ranks as well as a shortage of ammunition and a lack of heavy weapons such as anti-tank weapons and vehicles," Ismail told AFP via the Internet.

International developments have also played a role in the rebels' losses.

Washington late this summer backtracked on threats to strike regime targets in Syria after striking a deal with Russia that would see Damascus hand over its massive chemical arsenal.

The rebels "had hoped such strikes would destroy the regime's military infrastructure and allow them to enter Damascus", said the expert.

Thomas Pierret, a Syria expert at Edinburgh University, said: "It is clear the current loyalist surge is linked to the prospect of Geneva II", a slated peace conference that would bring rebels and the regime to the negotiating table.

"If the (opposition) National Coalition goes to the talks, it will be in a position of weakness, militarily and diplomatically," said Pierret, adding that the United States has in recent weeks down-scaled its assistance to the opposition.

"In any case, Assad's departure is out of the question right now, because neither the Russians nor the Americans want it," he added.