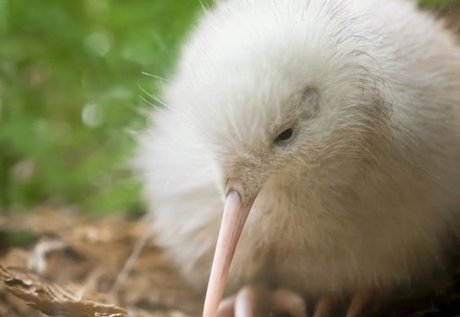 An expectant silence hangs over the Pukaha bird sanctuary as hundreds of spectators await a glimpse of a rare white kiwi, a bird held sacred by New Zealand's indigenous Maori people.

A collective sigh follows his unveiling to the crowd, although this appears to be prompted more by the chick's cute appearance than any mystical qualities.

Resembling a fluffy white tennis ball with an elongated beak and stout, three-toed feet, the white kiwi has become a symbol of New Zealand's efforts to prevent its emblematic national bird from becoming extinct.

The male chick, named Manukura -- meaning "of chiefly status" in Maori -- hatched on May 1 at the sanctuary north of Wellington, becoming the first white kiwi ever born in captivity.

Pukaha's field center manager Kathy Houkamau said the chick had sparked unprecedented interest in the program to save the flightless bird species, which is threatened by introduced predators such as stoats, rats and ferrets.

"Manukura is proving to be a strong advocate for kiwi because he's so rare and people are really interested in him, he's drawing people to Pukaha and also to the species generally," she said.

"People are learning more about kiwi and threats to kiwi."

The Department of Conservation, which runs the sanctuary, estimates there are fewer than 70,000 left in New Zealand, and several sub-species are listed as critically endangered.

Kiwis are normally brown but birds in the gene pool that Manukura came from have white flecks in their plumage, giving rise to the occasional all-white specimen.

"We don't know when they're going to appear, we could get another next year or there might not be another white kiwi for 50, 100 years."

Studholme said Manukura's appearance was a cause for celebration among Maori, who traditionally see a white kiwi as a symbol of new beginnings and renewal.

"Culturally, it meant a lot for the local iwi (tribe)," he said, explaining that tribal elders held a ceremony to bless the bird shortly after its birth.

The blessing, along with a rigorous scientific breeding program, appears to be paying dividends for Pukaha, which has hatched 14 kiwi chicks, compared with an average of two a year between 2005 and 2010.

The sanctuary, established in 2001, is a forest where wildlife officers have laid traps and baits to minimize predator numbers.

The adult birds roam free and any eggs that are produced are collected and brought to a kiwi nursery, where the chicks are cared for until they are big enough to be released into the forest.

Studholme admitted that his heart was in his mouth when he set birds free, knowing that attempts to eliminate all predators from the forest could never be 100 percent effective.

"You can't dwell on it, you've got to be confident in the work you've done," he said, but added: "It only takes one ferret to get past your defenses and they can wipe out five kiwi nests in no time.

Overall though, the Pukaha sanctuary and similar protected wildlife areas have succeeded in arresting the decline in kiwi numbers, a massive improvement from the 1980s, when populations were falling alarmingly. Manukura's sub-species, though, the north island brown kiwi, is still considered to be in serious decline.

There are doubts about whether Manukura will ever be released into the wild because of fears his white plumage marks him as an easy target.

"If you're white and you're in the bush at night, you could be at greater risk," says captive breeding ranger Darren Page.

But that would be the case mostly with kiwi's natural predators, like laughing owls, he says. "Of course, those predators are gone now. We've got your introduced predators like your stoats and your ferrets, which hunt by smell."

Still, Manukura may face a lifetime in Pukaha's kiwi nursery, where Houkamau says visitor numbers have doubled in the past two months on those days where he is made available for viewing.

"I do think of the world in terms of before Manukura and after Manukura," Houkamau said.

"I guess the arrival of a white chick changed everything here, we suddenly had an international celebrity on our hands and everyone wanted to see him."