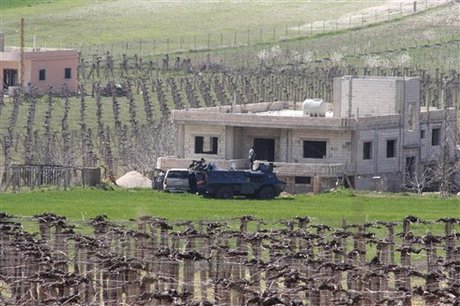 According to a report published in the daily, the army intelligence is raiding several towns in the middle and west Bekaa, where wanted suspects took shelter.

The suspects are allegedly involved in planting road side bombs in the Bekaa and attacking army and Hizbullah convoys.

A security source told the newspaper that the raids are based on a series of investigations and according to testimonies from detainees, who in turn confessed to their involvement.

The source pointed that “tens of Lebanese and Syrian nationals were detained.”

The suspects reportedly form “secret” cells that move between the villages of Bekaa and their activity increases and calms according to the security situation in the country.

The source revealed that the cells are “directly linked to the armed Syrian opposition groups and recruiting youth and sending them to battles in Syria, in addition to plotting terrorist acts along Lebanese territories.”

Several Hizbullah convoys that were heading to Syria were targeted in the Bekaa recently.

The last bomb attack was in July after one vehicle was struck by an explosion near the al-Masnaa border-crossing, while other vehicles in the convoy escaped the attack and continued along the road.

The bombing was the fourth time that a vehicle has been targeted by an explosive device in the Bekaa region, which is a stronghold of Hizbullah.

Good job, while you are at it go crack down on the other terrorist… you know the Iranian militia, the one that poor momo keeps insisting is Lebanese but takes orders and is payed by the Ayatollah

yes and when the army wants to crackdown on hezbi drug dealers they get shot at by hezbis.... LOL

Wow, they could almost be describing Hezbollah !

- Secret "Cells" that move between villages.
- Activity that increases and calms according to the security situation
- Plan roadside bombs
- Fight in Syria
- Recruiting youth and sending them to syria
- Plotting terrorist acts along the Lebanese territory

This is the exact Hezbollah description ...

Both believe in a fake God of death.

Both are led by fake religious / military leaders with beards.

Both answer to foreign orders.

Both are funded by illegal activities and/or foreign countries.

For a true Lebanese to mock & degrade the LAF must be an affiliate if Zionists & with other Arab countries that support them , this is the ultimate betrayal of our Cedar Land & must face the Death Penalty !
They are:
g-p
fc
peace
ice-man
shoo-yaba

You all should be hanged immediately then thrown in enemy territory without any burial rights just to set an example to other potential traitors of our Armed Forces who sacrifice themselves to defend our Holy Cedar Land called Lebanon .
Signed Wolf !