U.N. to Send Envoy to Bangladesh Amid Rising Violence 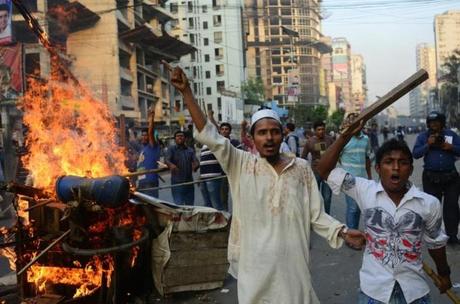 An United Nations envoy will visit Bangladesh to hold talks with political parties about ending an election standoff that has sparked deadly violence, an official said Thursday.

Haque would not give details of the four-day visit, which comes as the main opposition holds deadly street protests against the timing of the January 5 elections and threatens a boycott.

But the mass-circulation Daily Star, without naming sources, said the envoy would carry "a strong message" from the U.N. chief to rival political leaders to hold "free, fair, credible and inclusive" polls.

There was no immediate comment from the U.N. office in Bangladesh.

The U.N. sent Fernandez-Taranco to Bangladesh in May to try to bring rival parties together to calm tensions.

Three more people were confirmed dead on Thursday in street battles and other violence between opposition supporters and police.

Fifteen people in total have now been killed since Monday evening when the elections commission announced the poll date.

A blockade of roads, railways and waterways called by the opposition entered its third day on Thursday, halting public transport and forcing the closure of offices and businesses nationwide.

The main opposition Bangladesh Nationalist Party (BNP) and its allies want Prime Minister Sheikh Hasina to resign before the elections to make way for a neutral caretaker government to oversee the poll.

Hasina, who cancelled the caretaker system in 2011, has rejected the calls and has instead formed a multi-party interim cabinet composed of her allies.

She has asked the BNP to join the cabinet but it refused.

Violence has flared in almost every major city and town since the date was announced, pitting hundreds of opposition activists against police, who have responded with rubber bullets and in some cases live rounds.

Opposition supporters have uprooted railway lines and blocked major highways, while some ferry services have been halted for fear of violent protests at ports as part of the blockade, which ends early Friday.

Several trains have been derailed since Monday after protesters removed tracks and sleepers, while lines have also been blocked and coaches torched.

Police said an auto-rickshaw driver died of burns early Thursday after his vehicle was set on fire in Dhaka, while a man died in the port city of Chittagong after being hit with a small bomb.

An activist of the Jamaat-e-Islami, a key BNP ally, was shot dead by unidentified attackers in the western district of Jessore late Wednesday, police said.

At least 45 people are known to have died since late October when opposition parties launched a wave of demonstrations to try to force Hasina to stand down.