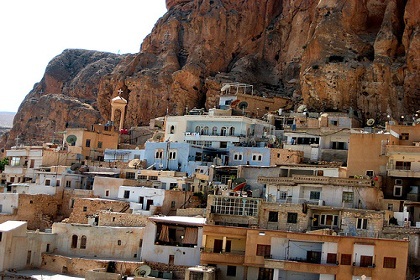 Syria rebels moved into the center of the historic Christian town of Maalula on Monday after sending explosive-filled tires hurtling down on security forces deployed there, a security source said.

The rebels, including jihadists from the Al-Nusra Front, sent tires packed with explosives rolling down from positions in the cliffs above the town, the source said.

Syrian state news agency SANA said the rebels had entered the Orthodox Mar Takla convent, in the middle of the city, which had previously been controlled by the army.

The picturesque town is considered a symbol of the ancient Christian presence in Syria, and its 5,000 residents are among the few in the world who speak Aramaic, the language of Jesus Christ.

The Syrian Observatory for Human Rights monitor confirmed that rebels had taken part of Maalula after five days of fighting.

The renewed clashes in the town come as the regime battles to gain control of a string of nearby strategic towns and villages along the Damascus-Homs highway, north of the capital.

It has recaptured the town of Qara and Deir Attiyeh, and government troops are now battling rebels for control of Nabak.

The regime is seeking to encircle the rebels in the Qalamoun region north of Damascus and sever opposition supply lines across the nearby border with Lebanon.

Elsewhere in the country, rebel fighters took a weapons depot in the southern province of Deraa after several days of fighting, the Observatory said.

In video distributed by the Observatory, a rebel can be seen trampling the severed head of a soldier killed in the fighting.

In the Golan Heights meanwhile, the Observatory reported heavy fighting in the Khan Arnabeh and Sama Daniah areas.

The clashes came as witnesses said a mortar fired from Syrian side of the ceasefire line with Israel had landed outside the town of Majdal Shams in the Israeli-occupied part of the Golan Heights.

An Israeli army spokeswoman said there had also been small arms fire in the central Golan towards Israeli troops during the morning.

"Troops returned fire and confirmed a hit," she said, without giving further details.

hoping that the wahabi monsters don't eat the christian children or behead the innocent sisters.