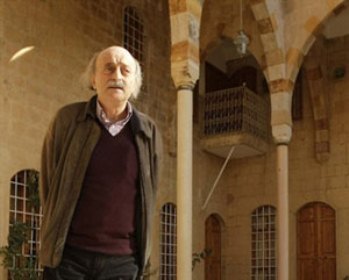 Progressive Socialist Party leader MP Walid Jumblat said on Wednesday that politicians are incapable of resolving any of the local crises, calling for reconciliation among the residents of Tripoli to end the sectarian clashes.

“President Michel Suleiman, Speaker Nabih Berri, Prime Minister Najib Miqati and I are working on the same level but we are incapable of ending the standstill,” Jumblat said in an interview with al-Akhbar newspaper.

He pointed out that the “game of nations” made Lebanon slip over into the turmoil in Syria, which is having a significant impact on the country.

He said that al-Mustaqbal movement should realize that there are powers “stronger than us fighting on Syrian territories.”

“It's a conflict of nations,” he noted.

Jumblat described “Tripoli as an example of the situation in Syrian villages such as Qalamoun, Homs and Aleppo.”

“Tripoli today is governed by the flow of money, which is representing the ongoing conflict between Alawites and the Salafist powers.”

“I doubt that the leaders of Tripoli will be able to control the situation in the northern city,” Jumblat added.

The Druze leader called for a truce between the rival neighborhoods of Jabal Mohsen and Bab al-Tabbaneh.

“The leaders of the two neighborhoods should carry out a reconciliation,” Jumblat said.

He considered that the situation in Tripoli is “unacceptable,” saying: “They want to cleanse the city of Alawites and end their existence unless the aim is to create an alibi for the Syrian regime to interfere.”

At least 10 people have been killed and 100 others wounded in clashes between the rival Tripoli neighborhoods of Bab al-Tabbaneh and Jabal Mohsen since Saturday.

The fighting in the city is linked to the war raging in neighboring Syria. Bab al-Tabbaneh district, which is majority Sunni, and Jabal Mohsen, whose residents are from Syrian President Bashar Assad's sect, have been engaged in severe gunbattles since the revolt against him in March 2011.

Tensions soared in the city in August when twin car bombings hit Sunni mosques and left hundreds of casualties.

The latest round of violence erupted last week when Jabal Mohsen residents were shot in their feet in vengeful sectarian attacks.

Jumblat adopted Berri's initiative to end the conflict in Tripoli.

“I agree with him. The army should control the situation in the city and the heads of the security agencies should be replaced,” he said.

Berri suggested recently an initiative to salvage the city of Tripoli by deploying the armed forces throughout the city and giving them the needed political cover to reach stability in the city.

Jumblat also revealed that the Internal Security Forces Intelligence Branch should be handed over to the army control.

Concerning the cabinet formation process, Jumblat expressed belief that the country is “paralyzed.”

He wondered what PM-designate Salam could do as long as both rival parties are setting conditions and counter-conditions.

Endeavors are ongoing to end the cabinet deadlock as Prime Minister-designate Tammam Salam continuously said that conditions and counter-conditions set by the rival sides have brought his efforts to form a cabinet to a stalemate.

Since his appointment to form a cabinet in April, Salam has been seeking the formation of a 24-member cabinet in which the March 8, March 14 and centrists camps would each get eight ministers.

walid jumblat is trying desperately to please the Syrian regime once more by aligning his views to those of berri.