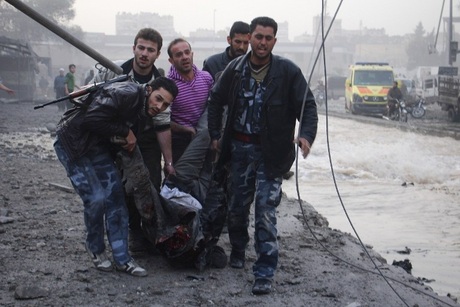 A rebel commander has frozen to death in the bitter cold brought by a snowstorm that has swept Syria this week, a monitoring group said Saturday.

"The body of a rebel commander who was on his way from (the northwestern province of) Idlib to Homs (in central Syria) has been found. He died during the snowstorm," said the Syrian Observatory for Human Rights.

Observatory director Rami Abdel Rahman told Agence France Presse there were no signs of gunshots or other wounds and that the body was "frozen."

Abdel Rahman said the unnamed commander, in his 40s, was a member of the Islamist Suqur al-Sham brigades.

The Britain-based Observatory also reported that the frozen bodies of two men in their 30s were found in Homs province on a road to neighboring Hama province.

It could not say whether they were rebels or civilians.

Syria has been struck by a severe snowstorm that has brought icy temperatures to several countries in the Levant.

Starting Wednesday, the snowstorm brought sudden, low temperatures, below zero in some areas, not only to Syria, but other countries in the region.

By Saturday temperatures were starting to improve but several areas were completely covered in snow including Damascus, battle-torn Qalamoun, Aleppo province and Homs.

People living in rebel-held areas, where there are fuel, electricity and food shortages, have been especially affected by the storm, as have been refugees living in tents in neighboring countries.

The main opposition National Coalition reported Thursday that a baby and a child died of cold in Aleppo, northern Syria, and Rastan, in Homs.

But the icy weather did not stop the fighting on a key front at Adra, east of Damascus. Battles have been raging there for four days, ever since Islamist rebels launched an offensive aimed at capturing one of the main entrances to the capital.

The army hit back with a broad counter-offensive starting Friday, and vowed to "crush" the rebels there.

On Saturday, a security source in Damascus told AFP "the army's operations are continuing. Starting yesterday, we identified the areas where the terrorists are positioned and we are attacking them."

The source also said a "savage massacre" had been committed in Adra on Wednesday, without specifying a toll.

The Observatory had reported 15 civilians killed Wednesday and Thursday. On Saturday, it said another 12 bodies had been found near Adra, and that "activists have accused the regime of killing them."

Syria's war has killed more than 126,000 people in nearly three years, and forced millions more to flee their homes.

shades of the battle for zahle 1981

Respect to those fallen heroes...

you mean respect to dead cannibal terrorists, no way darling...
These terrorists are killing innocent 15 year old boys for cursing...they are kidnapping nuns to "protect them," and they are imposing their version of Islam that the prophet himself, if he fouund out what they are doing, would assassinate them with his own sword.

No Cedre, no respect for dead terrorists darling...

Man, u sound stupid calling all rebels cannibal terrorists.
U sound as silly as almanar or those iranian arabic-speaking channels.

But then, u're probably listening to those BS all day long...

Man, I follow not king from KSA or mullah from Iran, i follow the Quran and the Sunna. I tell the truth even if I have to condemn my brother. Syrian rebels are 99% heroes underarmed fighting a scumbag using sarin, scud, rape, starvation + shia thug militias.

Hahaha, that's what you all say in public. In private you support the terrorist tactics of killing all non/Sunni Muslims because it is halal for you and your cause. You want to have a caliph and sharia law of 1200 years ago. You call these terrorists heroes while they murder innocent young boys and massacre civilians, kidnap nuns and priests. Yeah they are heroes to you because you are of the same fabric.

Go to hell with your wahabi propaganda cedre

Respect to mother nature, for it's incredible humiliation of the Salafis and takfiris, may god continue to punish cedre & his brother for their crimes against the Syrian people and their spread of hatred against other sects, and please kill every last one of them.

saudi first. Rest in hell to your beloved brothers.

The man died a Hero unlike the followers of dictators who only care about how they can benefit themselves, and all those who support Assad will no doubt be brought to Account.

Not to worry, he will thaw out in the fires of hell.

nice, Nature has its own punishment,that Infidel deserved that

Firstly sorry about the late reply.. I'm not on here all day long like some other people.. I will tell you all about Hafez & Bashar Al Assad as soon as you tell me about Rafic & Saad Harriri..